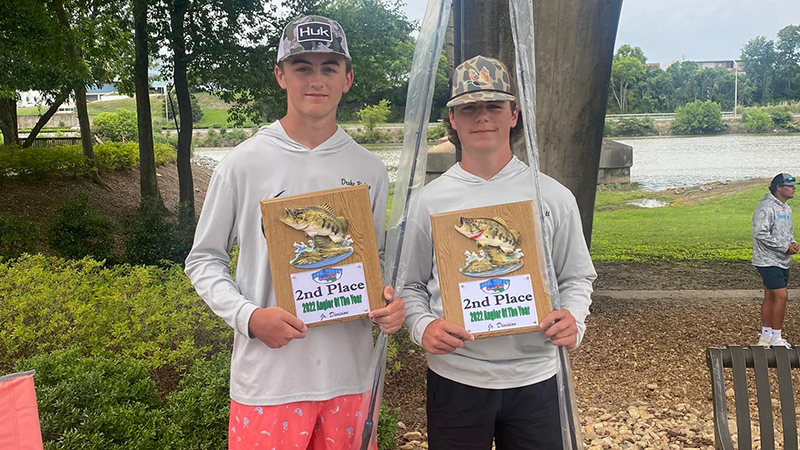 The Callaway High School duo of Drake Bishop and Kaleb Garrett finished third place at the state championship to book a spot at the TBF Junior World Championship. This is the first time a Callaway fishing team has made it to a national tournament. The dynamic duo also earned a second place finish in the angler of the year points.

The junior earned their third place finish with a combined weight of 2.99 lbs in round two, just .06 lbs behind the team that finished in second place.

The state championship took place over three days last week on Neely Henry Lake outside of Gadsden, Alabama. The marathon of fishing across these three days saw Bishop and Garrett continue their great season and even extend it a little bit further. Both individuals will be moving up from the junior division to the senior division as they make the leap from middle to high school over the summer.

The Callaway fishing program consists of three senior teams from the high school and three junior teams from the middle school. The Callaway fishing teams are able to stay afloat because of a group of supportive parents. Unlike other sports, the fishing program does not get all their equipment supplied by the school. The parents use their own boats for the anglers to use for the various school competitions throughout the season.

Callaway was well represented at the tournament as there were two other junior teams and two senior teams from Callaway at the event. The duo of Tripp Glover and Jackson Adams finished fifth place in the junior division with a combined weight of 1.54 lbs in the second round. The other Callaway junior team was made up of Nathan Searels and Ryder Crawford, who finished tied for ninth in the junior division. On the senior side of the championship, Caden McMillian and Krystyn Garrett finished eighth with a total weight of 9.09 lbs. The other Callaway senior duo — Nathan Odom and Dawson Foster — finished tied for 20th in the senior classification.

The competitions themselves are judged by the weight of the drive fish the team catches. Each team consists of two anglers and a boat captain. This duo’s captain is Brent Bishop, the father of Drake Bishop.

The Callaway fishing program has been gaining more traction within the school system every single season culminating in its best season yet this year. The program is always looking for competitive anglers and this season saw the duo of Bishop and Garett improve so much they will be the first Cavalier fishing representatives at a national tournament.

The TBF Junior World Championship will take place from July 26-29 at Kentucky Lake outside of Paris, Tennessee.