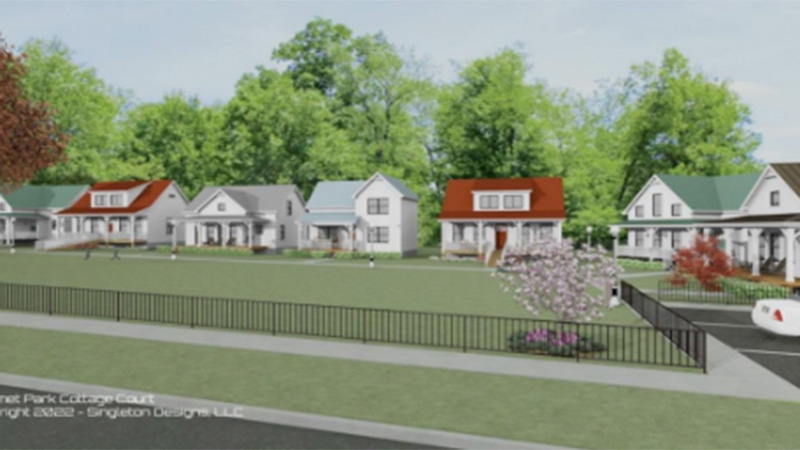 Troup County Habitat for Humanity (HFH) is teaming up with the Calumet Park Association to bring a new style of HFH homes for its home recipients.

Troup County HFH has plans to build a series of cottage-style homes on the corner of Daniel St. and Ware St. as part of its homeowner candidate program. Sandie Pike, executive director of Troup County HFH, said the organization has plans to build at least seven cottage-style homes on an undeveloped acre of land at the corner, creating a community space that residents would be a part of. The project is currently being dubbed the Calumet Park Cottage Court.

“Everyone deserves a nice, decent place to live, that’s always what [Habitat for Humanity] has stood for,” Pike said. “It’s going to be amazing. Instead of serving one to two families, we’ll be serving seven families when we start this.”

Pike said the partnership with Calumet Park Association began when she and Dr. Robert Tucker, a member of the association, compared housing ideas they had seen in Atlanta communities. Such neighborhoods, Pike noted, maximized the space of smaller houses to create functional homes.

“We looked at the size of the houses in Calumet, and we knew the need for affordable housing was needed in LaGrange,” Pike said. “I loved the micro-homes I saw in Atlanta. The homes are smaller, but the quality is amazing, and Dr. Tucker said he liked the cottage-style look. Between [us,] we came with a concept to promote neighborly love.”

Renderings of the cottages show each home will consist of up to three bedrooms and two bathrooms and include amenities such as an attached porch.

“The last three houses I built, they do not look like previous habitat homes,” Pike said.

“They have tile … crown moldings. We take a loss on every house we build anyway, but we would not put someone in something we would not live in ourselves.”

Homeowner candidates go through a stringent qualifying process to become homeowners through HFH. When funding is available, applications for homes open and a family selection committee is formed to select the most appropriate candidate for the build, Pike explained. The selected candidate must undergo budget workshops and homeownership classes and put in sweat equity hours.

HFH plans to extend the project to build at least eight homes on Render Street in the future.

To date, Troup County HFH has built 99 homes and, through paid tithes to Habitat for Humanity International, have contributed to building 35 homes in third-world countries, Pike said.

The rezoning request for the project was approved by the LaGrange City Council Tuesday night.