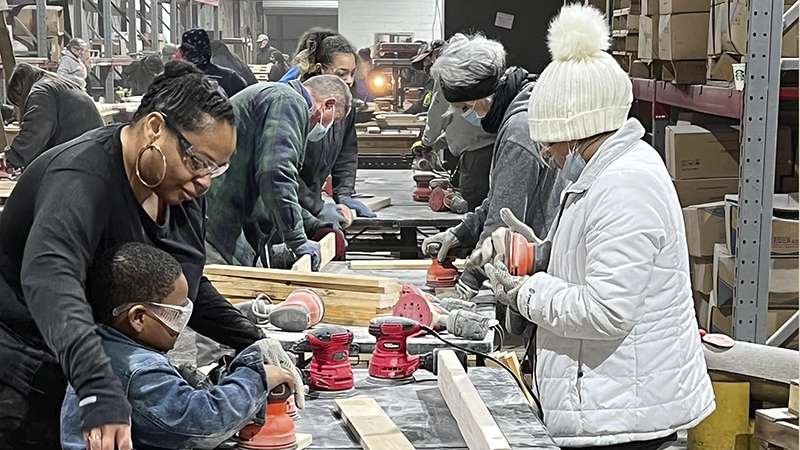 The LaGrange Chapter of Sleep in Heavenly Peace is turning four years old next weekend, and what better way to celebrate than to give back to children in the area.

On Saturday, June 25, Sleep in Heavenly Peace will host a volunteer bed-build to create as many as 400 beds for children in the Troup County area who need them.

The event will take place from 8:30 a.m. to noon in the New Ventures building at 150 Lukken Industrial Dr E., between Whitesville Road and Hamilton Road. The event is free, and volunteers don’t need skills, tools or experience to build beds. Watts said volunteers can sign up for the event ahead of time on the SHP website or simply walk in the day of. Water and beverages will be available.

The event is specifically family-friendly and safe for children.

“We love for children to learn what it’s like to serve, so if they’re there with a parent or grandparent, it sets a tone for them to see what serving looks like,” Watts said.

This build will be the organization’s fourth build this year and 36th since the chapter’s founding. During the pandemic, the organization’s efforts came to a standstill for over 10 months, Watts said, and though they were able to deliver beds, they could not build them.

However, volunteers returned as restrictions eased in 2021 and the organization was back in full swing by that summer.

The chapter deals with families in a multitude of situations, including displacement and domestic situations. Families who take in additional children may deal with financial constraints that prevented them from purchasing beds and mattresses from stores.

According to shpbeds.org, about 2-3% of American children don’t have beds.

Watts said SHP saw an uptick in bed needs following the start of the pandemic.

“We’ve had grandparents who have taken over custody of children after their parents died of COVID,” Watts said. “You think at one point you’ve got everyone [in Troup County] taken care of, but there’s a new group of people coming in all the time.”

Lumber prices as well caused a snag in the organization’s efforts. Watts said the chapter faced as much as a 40% cost increase across the board.

“We’re a 100% volunteer organization which means all the money we get in donations goes right back into materials. It really affects the number of beds we can build,” Watts said.

However, volunteers and donors kept the chapter across. One organization even donated batches of pillows to be donated with the beds, Watts said.

LaGrange’s SHP will participate in the national Beds Across America build in September.