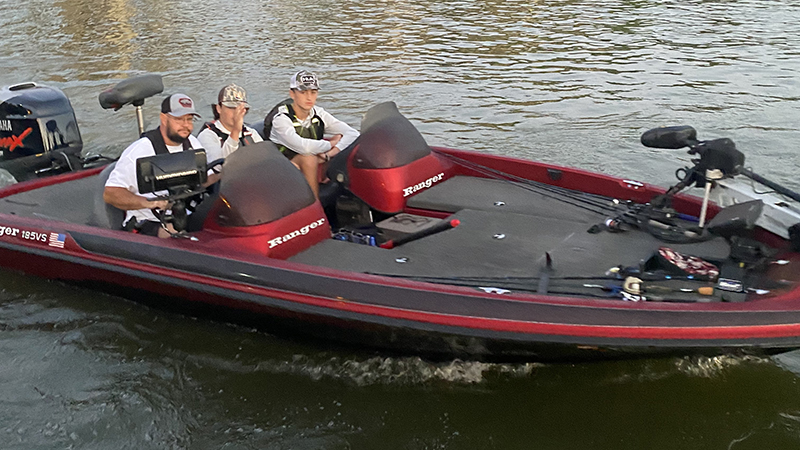 Drake Bishop and Kaleb Garrett went from a couple of Callaway anglers to Callaway fishing royalty this season. The duo is the first members of the Cavaliers fishing team to make a national tournament as the team qualified for the TBF Junior World Championship. It is an honor few receive as just a handful of teams from each state qualify.

“It’s pretty cool to be the first team from Callaway to make a national tournament,” Garrett said.

The duo finished third at the state tournament at Neely Henry Lake in Gadsden, Alabama last weekend. The team’s third place finish at state gave them enough points to earn a second place finish in the season-long angler point competition to book a spot at the TBF Junior World Championships.

It was almost not to be as the team encountered difficulties getting their boat working on the first day.

“It was tough,” Garrett said. “We had boat problems bad.”

The first boat and the backup boat both were having trouble starting. The chase for a spot in the TBF Junior World Championship could have ended there, but it did not. A man named Dusty Robinson proved to be the savior. He was on the dock Wednesday when the boat malfunctioned on the boys. He took the boys on his personal time and took them fishing until they could find a solution. He was from the area practicing for his own tournament and generously sacrificed his time for the boys, who will be forever grateful for what he did for them.

Few athletes get to experience what it is like to compete at the state level much less at a national level like these two boys will be preparing to do so.

The two had different fishing journeys before combining to form a formidable duo during their sixth grade year. Garrett started fishing in sixth grade and dove in head first. He has constantly improved during his time as a member of the Callaway fishing team. Bishop, on the other hand, started fishing when he was just four years old. However, his first taste of competitive fishing was not until he joined the Callaway junior team in sixth grade.

The duo competes in roughly 15-20 competitions a season. Most of the time they are traveling to new locales and have to figure out the lake once they arrive.

“Every lake we fish at is different,” Bishop said. “If you’ve never fished at that lake before, it’s a totally new experience.”

What makes the sport of fishing so different from other high school and middle school sports  is the fact that the athlete/athlete’s parents have to supply most of the equipment – that includes the boat and the reels among other supplies. The team is able to afford to travel so far by fundraising throughout the year. The team is already starting to sell advertisement space on the boats, uniforms, etc. for next season, but this duo is not worrying about next season yet. The team is selling TBF Junior World Championship shirts currently to help finance their journey to nationals next month.

Next year, Garrett and Bishop will be on the senior team of the high school as they transition from eighth to ninth grade, but for now they have one more junior competition. The duo is going not to just fill in the numbers, they have eyes on winning the whole thing.

“We’re going there trying to win,” Garrett said with a smile.

The TBF Junior World Championship will take place on July 26-29 at Kentucky Lake in Paris, Tennessee.