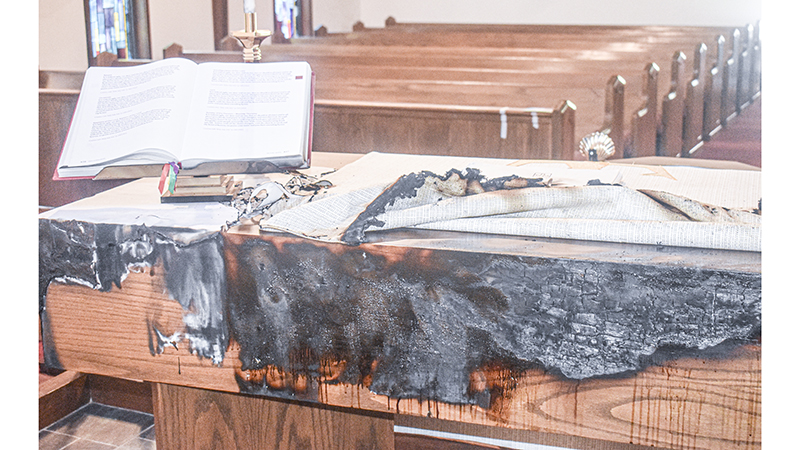 Deciphered is a burnt altar, one of three spots suspects tried to light afire to the Advert Lutheran Church earlier this month.

On June 13, tragedy struck when the Advent Lutheran Church was the victim of multiple arson attempts. Allegedly, after the church closed for the day, the suspect or suspects entered the church through a kitchen door window, which they smashed in to gain access.

“We don’t know whether it was a drunk, a gang, or someone who was just angry with the church or a member of the church who did this,” charter member and property committee member, Otto Korth said.

“They were all within arm’s length of each other. Try this one, didn’t work. Try that one, that one didn’t work. For whatever reason, they just left after setting it,” Korth said. “We don’t know if the smoke alarm went off or not … and scared them. Or if the smoke in the room got so bad that they had to leave.”

As the church moves on from this tragedy, new security tactics are being discussed, including the potential of implementing motion detectors, security cameras and an alarm system.

“The fact that a fire was lit three times. But for some reason, all three of them went out. Why didn’t each one of those fires light the building on fire? Somebody up there that knows, and we don’t,” Korth said.

After the burning of the altar, the church plans to continue service as normal and use with the altar with a sacred procedure.

“We have a procedure in the in our belief, that you can take a damaged altar covered with a white cloth. Say a blessing over that covered altar with the white cloth and then you have a new altar that we will do prior to moving forward in service,” Korth said.

As of Monday, Lt. Mark Cavender said the LPD has no leads on who committed this crime. However, they are pulling security cameras from surrounding buildings in the area.