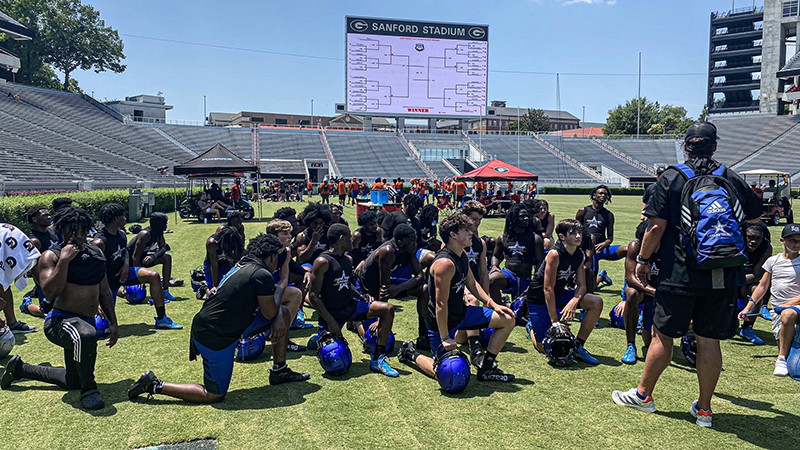 Callaway and LaGrange High Schools have been hitting the road to take part in 7-on-7s as they gear up for the 2022 football season. Less than two months out from opening kickoff, the teams are starting to ramp up summer training.

The Grangers hit the road last week as they headed up to Athens and took part in Kirby Smart’s 7v7 tournament. LaGrange got to spend a day between the hedges as the team was able to test themselves against some of the best teams from across the state. The Grangers also attended a 7v7 camp at Georgia Tech and will be traveling to the University of Florida to take part in one this week. LaGrange has a special connection to Florida as Grangers head coach Matt Napier’s brother Billy is the head coach of the Gators. Matt is going into his third season as the Grangers head coach and looks to build on a strong 9-3 season last year that saw LaGrange reach the second round of the playoffs.

The Cavaliers also attended the Kirby Smart camp at the University of Georgia last week to participate in the 7v7s. It was a busy week as the team also traveled to Bowdon High School to take on the home team and Villa Rica last Thursday. The Cavaliers have been one of the premiere high school football programs under head coach Pete Wiggins as the team won the AA state title in 2020 and made a semifinal appearance last season. Callaway is keeping the good times rolling as the team will travel to Auburn for some more 7v7 work this week. The Cavaliers have a Tiger connection in three former players — running back Tank Bigsby and offensive linemen Keiondre Jones and Tate Johnson.

The Grangers start the season on the road in Alabama as they take on Smiths Station on Thursday Aug 18. The Cavaliers host Opelika on Friday Aug 19 to get their season kicked off.