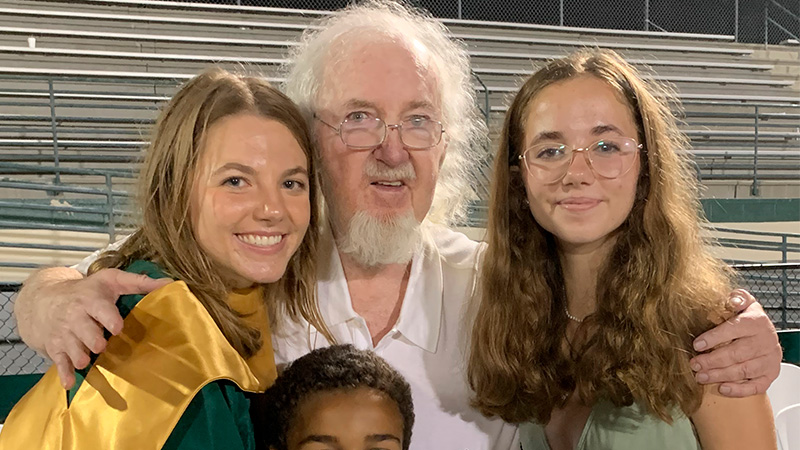 Nearly every day you could find Al Wyche in his hometown either leading his local furniture business, Beechwood Furniture, or his newspaper, The Troup County News — something he took a lot of pride in.

“He was a worker bee. He worked from sunup till sundown,” said his daughter, Rebecca Kelly. “I remember he would always say it’s 14 hours we work, and that just makes you feel good. That’s what we do. That’s what he did. That was in his blood.”

Wyche, 75, died earlier this week after an extended illness, leaving friends, family and co-workers to remember his strong work ethic and the opportunities he granted others.

Born in West Point, Wyche was a graduate of LaGrange High School and the University of Georgia. He started selling insurance after graduation, but when that opportunity went away, he created another.

Kelly, who was in first or second grade at the time, said she remembers the family living in a trailer on a farm in Greenville, when Wyche decided to start making bunk beds as a way of making ends meet.

“He had to start over. And we bought the farm in Greenville, Georgia, and moved there. We lived in a trailer with no running water,” Kelly said. “And he made bunk beds out of the barn on the farm. I remember him making bunk beds from sunup till sundown by hand. That’s my dad, he’s a survivor.”

In 1984, Wyche relocated to LaGrange and started a furniture manufacturing company that later became Beechwood Village Furniture Outlet. At one time, he also owned Skinner’s and American Home Appliance.

Kelly said in 2005 Wyche planned to expand and put a facelift on Beechwood Village, but the economy crashed in 2008, and he wasn’t able to realize that dream.

However, as he’d done before, Wyche found another opportunity — one that led him down another path — as he purchased The Troup County News in 2012. He’d always been fond of the newspaper business. His very first job was delivering newspapers as a child.

“I want people to know that about my father. And I think that inspires others,” Kelly said of her father’s resiliency. “Things happen in life, we have peaks and valleys. And just because you find yourself in a valley, doesn’t mean that there won’t be something right around the corner, right?… It’s just not what we envisioned. We’ve got to trust God and believe that he’s got a greater plan.”

Halee Yates, who worked as the advertising director for Troup County News for several years, said Wyche accepted her back into the workforce after she’d spent several years at home raising her children. He also was understanding that she wasn’t going to miss games, school plays or anything her children were involved in.

“Al had a lot of confidence in me and really believed in me, and it helped me gain the confidence I needed to believe in myself again being back in the workforce,” Yates said. “It really helped me get back on my feet and catapulted me into a career path again, so I’m also grateful for that.”

Yates said the newspaper meant a lot to Wyche, not only because the service it played in informing the community, but also because of the pride he took knowing the Murphy family, who he was close with, had started the newspaper.

She said there were a lot of people who worked for Wyche over the years who would leave for differing reasons, but he would seemingly always leave the door open to them to return.

Jared Boggs, who served as the managing editor of the Troup County News for several years, said he looked up to Wyche.

“He turned, for what’s it worth, a really, really small newspaper into something that was competitive, and he was really proud of that,” Boggs said. “He was really proud of us being the legal organ for as long as we were and at least being in the running for it and being considered for it. He had to grow the paper a lot to do that.”

His funeral is Tuesday at Pinewood Cemetery in West Point beginning at 11 a.m.