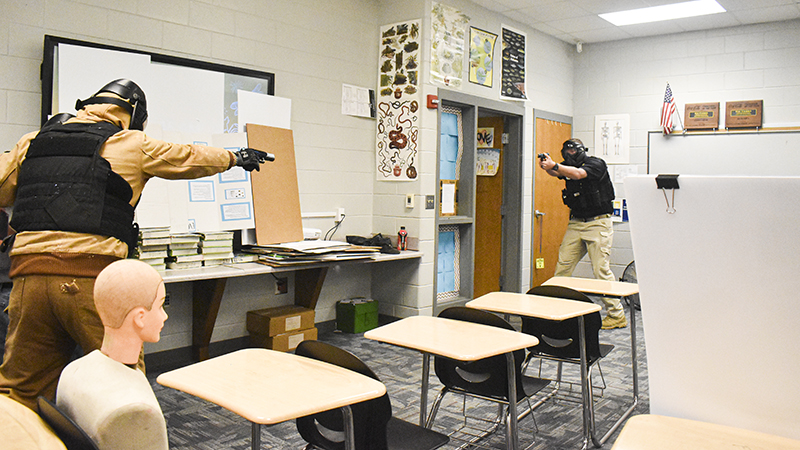 An officer enters a LaGrange High School classroom as part of an active shooter scenario. The officer approaches, and later shoots, a fake gunman [far left] to protect involved hostages. 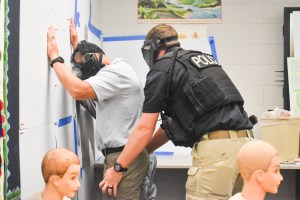 After taking down the gunman, the officer pats down two hostages as is protocol, before leading them out of the classroom.

With guns drawn, officers entered the mostly empty expanse of LaGrange High School one after the other early Thursday. The goal was simple: Be prepared, in case of the unthinkable.

Thankfully, the situation at hand was a mere training exercise to prepare officers. The training exercise, one of several this week, prepared officers on how to react in a situation in which an active shooter entered the school, including how to disarm the shooter, rescue any hostages and treat the wounded.

In light of recent mass shootings, namely the Uvalde, Texas school shooting in May where 19 children and two teachers were killed, officers participating in the training were advised to have the mindset that hostages in the scenario are in danger, whether there is gunfire or not.

“We’ve always focused on the hostage side of [these shootings]. Apparently [with Uvalde] there were issues where there was no active shooting going on so [officers] didn’t want to enter because it was more of a hostage, barricade situation. There was no driving force,” said Detective Stephen Spivey, who advised participating officers ahead of the training. “Now, we’re transitioning to that immediate danger mode. In the scenario where you get a call of shots fired [and] there are reports of people who have been shot in the school, even if you don’t hear active fire, there is still someone in there who is in immediate danger. You may not always have that audible when you go in, but you still have to move in.”

The scenario opened with an officer entering the school from an east opening. Each officer went into the scenario individually. Some commented beforehand they did not know the layout of the high school. They were followed during the exercise by another LPD staff member, who evaluated their reactions. 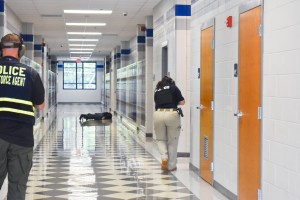 Sgt. Rebecca Noles moves through a hallway at LaGrange High School during Thursday morning’s active shooter drill. Ahead of her lies a “victim” of the scenario shooting. Officers had to check the victim during the drill for vital signs.

Upon stepping out of an unmarked vehicle, officers entered the school and rounded the hallway. The sound of gunshots echoed down said hallway from a speaker in a nearby classroom where the fake gunman was stationed – two hostages, a “teacher” and a “student” were also in the room. Just outside the classroom laid a mannequin, symbolizing a shot victim.

The gunman, another officer, began screaming threats as the officer approached. The officer entered, quickly noting the two hostages, and demanded the gunman drop their weapon.

The scenario from there played out in many ways. If the gunman didn’t drop their weapon when asked, the officer would shoot, taking out the gunman with one to several hits. At times, the officer would be shot through the use of protective vests. The bullets used in the training are Simunition, non-lethal training ammunition, filled with pink or blue ink when the bullets hit their target, similar to paintballs.

The bullets have the tendency to leave bruises even with a bulletproof vest.

With the gunman down, the officer would have to pat down the hostages for weapons, a necessity to weed out any other potential gunmen. The officer then reported the gunman and hostages’ states and any injuries they may have received.

“Sometime after we’ve rendered aid to everybody, we would escort [barricaded hostages] out,” explained Sgt. Joshua Clower, who was also evaluating the training.

LPD Chief Lou Dekmar noted Thursday during a visit to the LaGrange Rotary Club that these active shooter trainings, as well as general safety training, are conducted regularly. Active shooting training specifically has been performed by the LPD for approximately 10 years.

He added the community’s relationship with area law enforcement has become key to preventing incidents locally and addressing threats that potentially can become deadly.

“A lot of times, after or during a shooting, it always comes up that somebody saw something, or heard something or knew something but no one acted on it,” Dekmar said.

“[Here], we have such a great relationship with the school system and the community that whenever anyone catches a whiff, [of threats] they call us. We run approximately four to six operations a year that curb potential threats.”