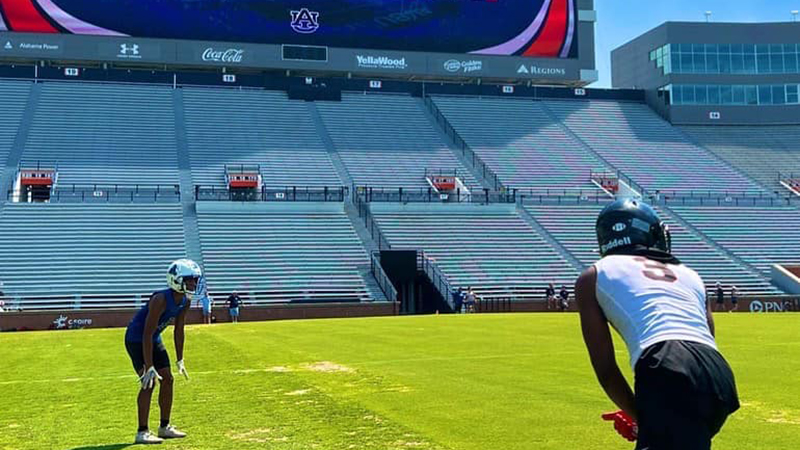 Callaway and Troup sent their football teams to Auburn University on Thursday for a 7-on-7 tournament in Jordan-Hare Stadium. Despite the scorching temperatures, the two teams braved the sun beating down on them and competed well against elite competition.

The Cavaliers showed up and flexed their might as they went 6-1 and made it all the way to the semifinals.

Making the semifinals is a regular occurrence for the Cavaliers as they made it into the final four teams in the AA playoffs last season. This year, the team will be looking to return to the perch and win the programs second state title after head coach Pete Wiggins led them to glory in 2020. Despite some familiar faces on the docket, the Cavaliers will be entering a new region this fall and will be playing a new slate of region teams.

Not to be outdone, The Tigers were able to go 4-1 just two days after competing at Georgia Tech in a 7-on-7 tournament. The Tigers took a tough loss to Auburn High School in their final game.

Once the football ended, the real fun began as Troup set up a waterslide to cool off after a long day in the sun.

The Tigers are coming off a season that saw them go 8-3 and fall in the first round of the playoffs to Spalding in a game that ended 10-3 and could have gone either way. Troup will be looking to win a playoff game this season for the first time since 2018. That year the team made a run to the AAAA state semifinals where they lost to eventual state champions Blessed Trinity.

Callaway opens the season at home against Opelika and Troup opens on the road versus Harris County. Both games will be Aug. 19.