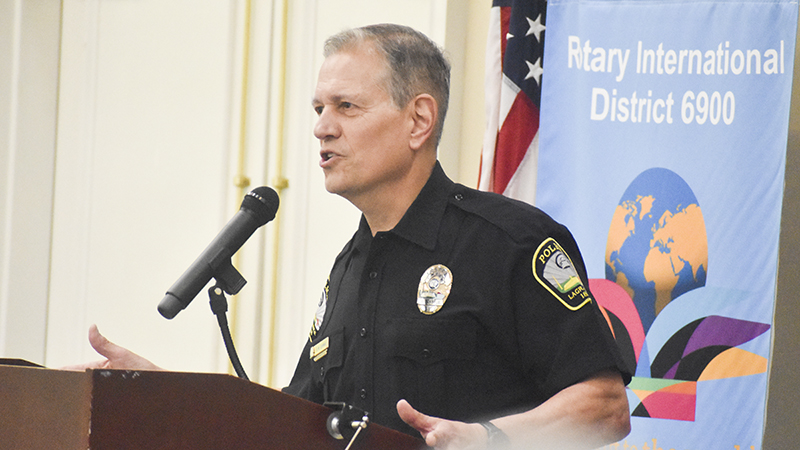 A saying goes it takes a village to raise a child. However, as LaGrange Police Department Chief Lou Dekmar recently pointed out during a visit to the LaGrange Rotary Club, it takes a community to raise a village. Everyone in that village, from the school system to area organizations and non-profits and local law enforcement, has a part to play.

Dekmar said that of the approximately 55,000 calls for service LPD dealt with last year, only about 3,000 of those calls led to arrests. This lies in the department’s partnership with approximately 70 different agencies and non-profits in Troup County.

“The nature of what we do as a department is we mediate and refer individuals to available services, or work with them to problem-solve the particular issue that has brought us into their lives,” Dekmar said. “Truth be told, we’re social workers. We embrace that in a way that impacts public safety.”

This approach can be seen in statistics, Dekmar noted. He said violent crimes in the country are 48% less today compared to 1995 despite a 20% increase in population. However, the LPD continues to take violent crimes at the utmost seriousness, noting there had been several recently successful prosecutions for these crime, specifically gangs.

“LaGrange, according to the [Georgia] Department of Corrections, has more individuals in prison for gang-related activities than any other jurisdiction in the state, including the Atlanta Police Department,” Dekmar said. “This is because city council, the DA’s office and the courts have taken the gang statute, indicated themselves on it and invested the resources. This way, when those who commit crimes affiliated with gang activities that result in a violent outcome are prosecuted to the fullest extent of the law.”

Intertwined with this swipe at violent crime is the conversation on gun control. Dekmar, while not specifically stating a pro or anti-gun ownership stance, noted the current laws are not as actively enforced to point of preventing guns to fall into the hands of potentially violent offenders.

“The stance I take is, if we first enforce the laws we already have, then [we can] look at other regulations,” he said.

“It looks like, for purposes of public opinion we pass laws, but there’s not really an investment in the resources to prosecute [violent offenders].”

From a local stance, the LPD’s priority is not just to prosecute offenders, Dekmar noted. It’s to give offenders with mental health or addictions the necessary help they need.

Around 2012, Dekmar helped initiate the Mental Health Court, which received funding from the city and the county that year. To date, approximately 100 individuals have graduated from the program.

In terms of police intervention, the bill allows law enforcement officers to bring in a mentally ill individual to receive treatment if they are evaluated to be at risk.

Following an incident with a work-release inmate, who committed a crime at 18 and was near parole at the age of 38, Dekmar sought to help inmates in his situation find meaningful work.

The inmate wanted to go through the transitional center in LaGrange so he wouldn’t be sent back to Atlanta. However, several available jobs in the area have felony bars.

“I asked where the bar comes from, and I said, let’s change it,” Dekmar said.

The man was able to obtain a position with LaGrange Animal Services where he remains today. Following this, Dekmar worked with the city to take the felony bar off several public works and sanitation departments.

The LPD additionally allows former offenders to fill out record restrictions, allowing people with past criminal violations to have their arrest records sealed following a legal process. At a recent job fair, the LPD processed approximately 150 record restrictions. Dekmar said.