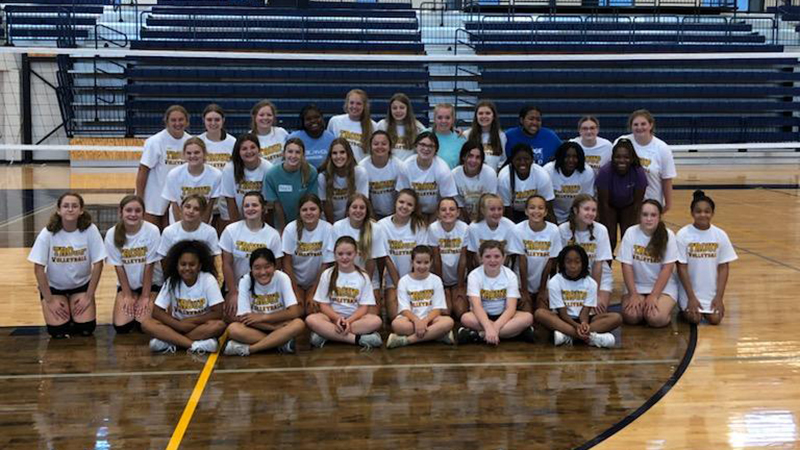 The Troup volleyball team hosted a camp for fourth to eighth graders from Tuesday to Thursday. This was the first summer camp for newly cemented head coach Hutch Blair. Blair, a graduate of Troup, was the coach of the ninth grade girls last year but got to take on the reins of varsity this year, which means he is now in charge of the summer camp.

“I think it went really well,” Blair said. “I was a general manager and coached with Jodi Dowden’s volleyball team when she did it several years ago, and I’m glad to have her as my assistant coach now.”

Because Blair’s appointment came in April, he did not have the proper time to get the word out about the volleyball camp. After his first year in charge next summer, he plans to have an expanded camp.

“We did not have a lot of prep time this year,” Blair said. “Normally, we would send out information to elementary schools.”

Next year, Blair will be planning out the camp much further in advance. Despite the relative lack of time to put it together, around 20 girls came out for instruction. Blair is hoping to add even more girls next year and hopes to attract boys that are interested in learning more about volleyball.

One of the reasons the camp went so smoothly was the fact that members of his high school volleyball team came out to offer instruction and help to the young campers. Every member of the Troup volleyball team that participated had a camper that they were responsible for. Campers can have any level of previous experience with volleyball. Blair looks forward to introducing young campers to the game as well as sharpen the skills of players who already have experience playing the game.

“Members of my team were camp counselors,” Blair said. “We split the campers up into four groups, and each was led by one of the seniors.”

Having such talented and well-informed players helped Blair facilitate his first camp being in charge. The other members of his team broke off into the groups to help offer one-on-one instruction or small group instruction.

Blair was the freshman coach last year and has already built up a rapport with the players. Having the foundation of being a Troup alumni as well as previous coaching experience has helped Blair tremendously as he adjusts to his first head coaching position.