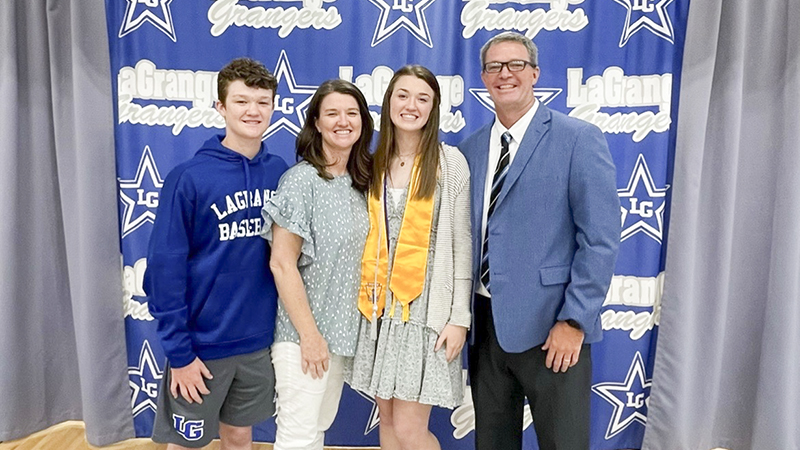 amie Bozeman has been LaGrange High School’s assistant principal for years. Now he’s the putting on a new hat as principal. Above, Bozeman [right] is featured with his family.

LaGrange High School has a new principal, and it’s a familiar face.

Longtime assistant principal Jamie Bozeman was approved as the new principal by the Troup County School Board at a special called meeting in West Point on Monday night. Bozeman will replace Alton White, who announced his retirement earlier in June.

“We are very excited to have Mr. Bozeman on board at LaGrange High School. He’s been very committed to that school for, I believe, 22 years as a teacher, coach and assistant principal,” said Superintendent Brian Shumate. “He certainly fits the bill in many ways, and he loves LaGrange High.”

Bozeman began his education career with LHS over two decades ago. He first served as a social studies teacher and a coach and remained in that role for 16 years. In 2016, he was promoted to assistant principal and has served in that role for the past six years.

Bozeman was the unanimous choice of both committees, according to documentation shared by Shumate.

“He was instrumental in getting the new International Baccalaureate program off the ground, so he knew the background of that and what the vision for that really is, and could help more that forward as well as other academic offerings at LaGrange,” Shumate said. “He’s a Granger through and through.”

Shumate said there was a handful of candidates, noting that White’s resignation came a little late.

“Mr. White decided a little closer to the end of the school year to retire. Not that we were under a huge rush, but we didn’t have as much time,” Shumate said. “We did a thorough advertising and interviewing process. We went through all the normal processes, with having different constituent groups who were represented on the interview committee and had a primary interview Wednesday and a secondary interview Thursday and made the decision Thursday afternoon.”

The board of education will recognize Bozeman at its next meeting.