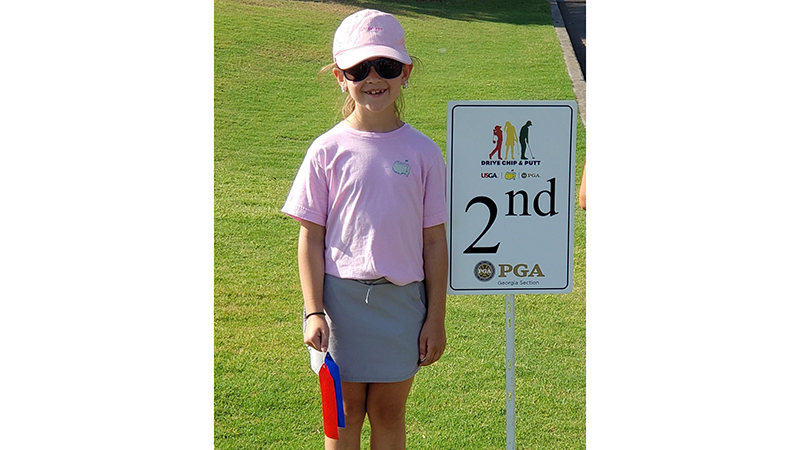 Kinsey Thrasher is a star in the making. The 7-year-old golfer is making a name for herself with a second place finish in the 7-9 age group in the sub-regional qualifier of the Drive, Chip, and Putt contest at the Columbus Country Club last week. Thrasher finished just one point behind the winner to advance to the regional round in August.

“It was exciting,” Kinsey said. “I scored 53 and the other person scored 54 points.”

Kinsey finished first in the putting aspect by a margin of 17 points. The oldest of four siblings, Kinsey is leading the way for her two younger brothers who also play golf. Golf runs in the family as her father, Ben Thrasher, is the head boys golf coach at LaGrange High School.

“I love it because it’s something we can do as a family,” Ben said. “I don’t make them do it. If they want to stop playing and try something else they can.”

Kinsey is all in on golf already. She imagines herself going to Duke to play golf and get a degree in astrophysics. The whip-smart young girl has lofty aspirations and the talent to back it up. Her golf coach, Angela Ormsby, sees the character and talent on display every week that might just carry Kinsey to the highest levels of golf.

“She’s got a pure golf swing and beautiful touch. The sky is the limit,” Ormsby said. “She never complains. It can be 100 degrees, and she won’t complain and will look to get better, which is something you don’t see very much in people her age.”

Kinsey still has  a bunch of raw talent as she has not been playing golf all that long.

“I’ve been playing since I was five,” Kinsey said. “Dad got me into it.”

Kinsey knows that putting is her greatest strength and driving is a close second and is fully aware that chipping is her weakest skill set right now. To have that kind of self awareness at such a young age is a rare trait.

Kinsey loves to go to competitions and perform against new competition, but nothing is as sweet as beating her younger siblings at golf. She loves the family aspect of playing golf in the Thrasher house and loves getting the chance to play with her dad out at the Fields Golf Club.

Now, Kinsey gets to prepare for the sub-regional round at TPC Sugarloaf in Duluth. If she finishes top three in the sub-regional round, she will advance to the regional round at Quail Hollow Country Club in North Carolina. Kinsey will have to win the regional to advance to the national competition at Augusta National Golf Club in April of next year. Kinsey will be competing the 7-9 age group for the next cycle as well before advancing to the next age group in the spring of 2023.