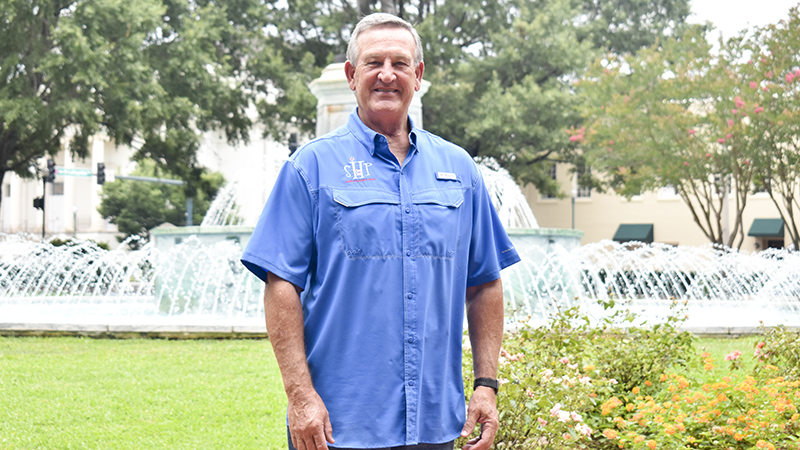 Greg Watts has spent four years helping the area’s children sleep comfortably through his locally founded chapter of Sleep in Heavenly Peace. This year, Watts will lead the Sweet Land of Liberty Parade, standing alongside the children he and his organization have assisted for years.

Sleep in Heavenly Peace (SHP) chapter president Greg Watts has spent the last four years building beds for children in the area who would otherwise sleep on a couch or even on the floor.

On July 4, during the 38th annual Sweet Land of Liberty Parade, there is a possibility Watts will be leading some of the children he helped in the community as he serves as the parade’s grand marshal.

“It’s not me, it’s a team effort, it always has been,’’ Watts said, giving the honor fully to the countless volunteers he’s had. “We got 20 to 25 people who help us. We have a lady who calls the parents about sheets, and another who coordinates the delivery teams. We have guys who set up the build days. There are so many people involved in this.”

That year was the first year the organization participated in the parade and also the first time Watts and his volunteers delivered their first bed.

“We built beds the week before [the parade], went to it, and that afternoon we delivered our first bed to a family in West Point,” Watts said.

Since the founding of SHP’s LaGrange chapter, volunteers, from residents to public service officers, have built 1,209 beds, all of which have gone back to the local community. SHP in has also participated in relief efforts for various natural disasters, including Hurricane Michael, wildfire victims in California, and tornado victims in Kentucky.

“When we started, we thought if we built 40 beds in a year, we’d be rocking and rolling,” Watts said. “Whether child or adult, you never know what someone is going through. We don’t understand the impact of someone being in a bad sleeping situation and not having something of their own.”

Looking back at SHP’s impact, Watts remembers fondly one volunteer’s encounter with a student at a local elementary school where he served as a mentor.

“The volunteer said that the student recognized him and came to him and hugged him stating, “Thank you for my bed,” Watts said. “Even though the volunteer did not immediately remember the student, the student remembered that he had helped him. Wherever there’s a need we feel like we can fill and serve children, we’re willing.”

While the majority of the organization’s beds stay within Troup County there have been times when its efforts have been needed past the county line.

Watts said the organization occasionally builds beds for families in Pine Mountain, Franklin and the Valley area. The beds are built as standard twin beds, suitable for children of most heights, Watts said.

Watts said he can receive as many as five applications for beds in one week. In a good week, volunteers can build and delivery a bed in the same week, though delivery can depend on the family’s schedule. At times, volunteers will deliver the bed when the child isn’t home so that they can come home to the bed as a surprise.

To get involved with SHP, visit SHPbeds.org and find the LaGrange chapter.

The Sweet Land of Liberty parade will begin promptly at 10 a.m. Participants will assemble in front of Sweetland Amphitheater beginning at 9 a.m.