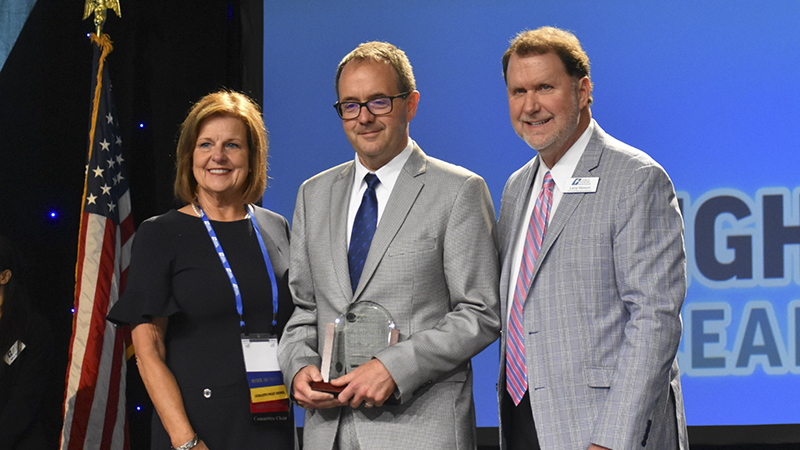 LaGrange Mayor Jim Thornton stands with Susan Hiott, past-president of the Georgia Municipal Association, and GMA Executive Director Larry Hanson at the association’s convention held earlier this week. At this convention, Thornton was inducted to the GMA’s Hall of Fame, which recognizes municipal officials who have made extraordinary contributions to municipal governments.

On Monday LaGrange Mayor Jim Thornton was inducted into the Georgia Municipal Government Hall of Fame at GMA’s annual convention in Savannah.

The Georgia Municipal Government (GMA) Hall of Fame recognizes municipal officials who have made extraordinary contributions to municipal government and been a strong supporter of GMA. The GMA advocates on behalf of cities within the state and offers training and resources to city leaders.

To be eligible elected and appointed city officials must have least 15 years of municipal government service in Georgia. The Georgia Municipal Association advocates on behalf of cities within the state and offers training and resources to city leaders.

“It has been a great honor and privilege to lead the municipal association and to serve Georgia’s cities,” Thornton said. “Georgia is the greatest state in our nation in significant part due to the strength and vitality of its cities, including LaGrange, which continue to lead the state into a more prosperous future.”

Thornton has recently completed his term as the GMA President for the 2021-2022 year, in his place as the new GMA President is Julie Smith, who is the mayor of Tifton. After serving as GMA president, Thornton will serve as the immediate past president for one year. This means Thornton will still be an officer of the Association (GMA) for one more year and as long as he is an elected city official.

Thornton is a member of the board and the executive committee, he said, and will be labeled a past president in future GMA sessions.

Upon being recognized for his dedication and stepping into new shoes as the immediate past president, Thornton plans to stay engaged with the GMA.

“GMA is such a great resource for LaGrange and such a great help to all of our cities,” Thornton said. “As long as I stay in office as mayor, I intend to stay very involved with GMA. One of the great things about GMA is that we get to share ideas and resources. What I have found is that there are absolutely no magic solutions to problems. But what you can do is learn sometimes from other people’s mistakes, who have tried different things, but there are no magic solutions out there.”

Thornton said his experience with GMA has offered him insight on how other cities in the state operate. LaGrange, he said, has been noted by GMA as a leader across the state, though he said there was still plenty of knowledge LaGrange could take away from other communities.

“Other cities look to us for leadership because often we’re setting the example,” he said. “For example, at GMA this session one of the big discussions was how to improve policing and how to make policing more effective and how to bring the police closer to the communities. GMA asked our police Chief Lou Dekmar along with the mayor of College Park, to lead that discussion because other cities are struggling with the same issues.”

LaGrange’s progress as a community was most notable during GMA’s last convention, Thornton noted.

LaGrange’s Thread trail system, for example, was an idea inspired by a similar project Carrollton had. Thornton said Newnan found its inspiration for a similar trail project from LaGrange in turn.

“Different cities share ideas from time to time, and certainly that will continue and that’s one of the great things about GMA,” he said.

Through his time as a member of GMA and an elected official for LaGrange, Thornton was able to learn from other mayors as well as learn a couple of things about LaGrange he didn’t expect, he said.

“Georgia is , a big state with 537 cities that come in many different shapes, colors and sizes. We tend to think of LaGrange as a small town,” Thornton said. “If you put us on that list of 537 cities, we’re in the top 37 in terms of size. We’re a larger city by Georgia standards than others might think. Another thing you discover is that the needs of cities and the issues they face are virtually the same. If you talk to the mayor of any one of those 537 cities, they’re all going to talk about the same issues, public safety, housing, workforce, transportation. It’s just all on a difference of scale,” Thornton said.

Thornton has served on the GMA Board of Directors and previously chaired the Legislative Policy Council, the Federal Policy Council, the Member Services Advisory Council, and the Municipal Government Policy Committee. Thornton was also appointed as a co-chair of the GMA Equity and Inclusion Commission.

Thornton was elected to the LaGrange City Council in 2009 and after serving one full term on the council was elected mayor in 2013. Thornton remains active in his church at LaGrange First United Methodist Church and serves as chancellor of the North Georgia Annual Conference making him the primary legal advisor to the United Methodist Bishop in Atlanta.