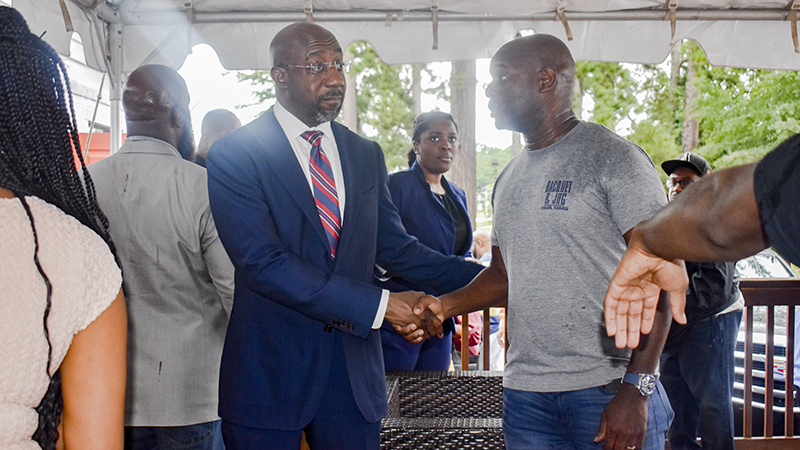 One rainy afternoon in January 2021, Senator Raphael Warnock campaigned on the expansive porch of Rhodes Sports Bar in LaGrange.

On Friday, Warnock returned to the same spot during a very similar rainy day, a comparison he noted with humor.

The rain may have hurt the turnout, as roughly 50 supporters were at the event, which also included lieutenant governor candidate Charlie Bailey and District 137 Rep. Debbie Buckner.

“We were dancing in the rain the last time I was here, and you all did an amazing thing,” Warnock said. “In a moment of intense diversity, Georgia [elected] its first African American senator, and it’s first Jewish senator.”

Warnock is vying for his seat with challenger former UGA football star Herschel Walker, who visited LaGrange in April.

One of the top points for Warnock’s campaigns is the state’s healthcare. Warnock is working to cap the price of a vial of insulin at $35 per month.

“[Georgia] is a state where 12% of adults have diabetes, and big pharma is gouging the costs,” Warnock said.

He additionally is working to cap the cost of prescription drug costs for Georgia’s seniors.

“Seniors won’t have to choose between buying subscription drugs or groceries in the wealthiest nation on the planet,” Warnock said. “On top of that, I’ve been insisting Medicare should be able to negotiate the cost of prescription drugs.”

In the midst of the healthcare crisis lies a new challenge. Friday marked the one-week anniversary of the U.S. Supreme Court’s overturning of Roe v. Wade, the 1973 landmark decision of the Court protecting a pregnant woman’s liberty to choose to have an abortion.

“Let’s be clear that what we saw last week was the overturning of a constitutional right for a woman and their ability to manage their own health care,” Warnock told the LDN following his visit.

“We need to center [the issue] on women, their wisdom, their values and their healthcare.”

Warnock’s alternative focus, he said, involves assessing global issues that have been hitting the state.

He said he has been urging President Joe Biden to do away with student loan debt.

“It would encourage entrepreneurship, home ownership, and [Biden] can do it with a stroke of his pen,” Warnock said. “Student debt is greater than credit card debt in our country. I don’t think our children should have a mortgage [in debt] before they have a mortgage.”