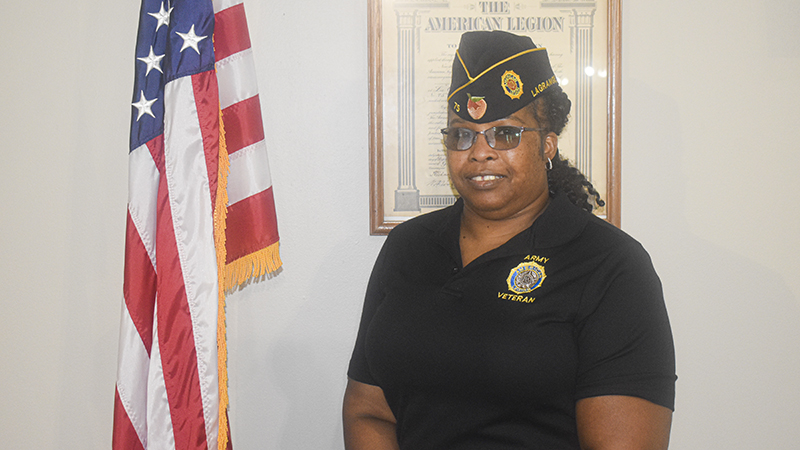 Editors note: this is a profile highlighting an area veteran for the Fourth of July holiday.

Tania Griffin is an African American female veteran who served in the Desert Shield/Desert Storm War. She has seen the trials and tribulations of life and war and yet still remains a warm light to the American Legion Post 75.

Griffin initially started her military career March of 1989. She graduated high school at age 16 and took a couple of years to figure out her next move. It wasn’t until she was 19 and thirsty for adventure she found herself signing up for the military.

“Honestly I was bored and wanted to do something fulfilling. I saw that the military was recruiting and signed up,” Griffin said.

Bright-eyed and officially in the military, Griffin was a 71L MOS. At the time a 71L MOS did primarily administrative tasks such as driving the commander, perform miscellaneous office duties and, on some occasions, identifying body parts.

“71L MOS were usually women, Griffin said. “Back then women weren’t allowed to be in combat positions. They were allowed to serve but not in the field.”

Griffin served as a 71L MOS for 14 years and left the position in 2003 and soon joined American Legion Post 75 in LaGrange as Post Adjutant, making Griffin the first African American Female Post Adjutant for the post.

Historically the post, officially named Baxter L. Schaub American Legion Post 75, has been in LaGrange for 100 years, Griffin said. Schaub, the founder of Post 75, is scene as a mystery to most. While there are a few pictures of him in archives, there isn’t much known about Schaub other than he fought in LaGrange and started Post 75 in 1923.

As Post Adjutant, Griffin works to make the Post a place where veterans can to come for resources and community, she said. Post 75 works with the Troup High School ROTC and does activities with them throughout the year. Around the holidays, the Post makes Thanksgiving boxes for members or for the families of veterans, gift boxes for the elderly, hosts a toy drive for Christmas and participates in Trunk or Treat for Halloween.

“They appreciate us doing bingo and it keeps the little bit of money that they spend and win here in the community,” Griffin said.

Through her passion and dedication to Post 75, Griffin managed an incredible feat and got the then National Commander Paul Dillard to LaGrange in early April of this year.

Currently, Griffin is working towards helping female veterans get healthcare.

“There are more women that have joined the military and the thing now is getting women the proper health care and making sure that female veterans are taken care of. Because from my own experience you can be easily discouraged by male veterans because some men and older veterans have not served with women,” she said.

“They have a hard time grasping that there were women that came after them that are serving and they can stand side by side with them and say, ‘Hey, you’re a Veteran. I’m a veteran too’ some men get it, some don’t.”

In her drive as the Post Adjutant, making health accessible for female veterans, and being an ally for vets, Griffin owns her own real-estate business called Cadence Realty. The word Cadence means a repetition of something. In the military, when they call cadence a drill sergeant would call out left, right, left to keep everyone in sync with one another, she said.

“That’s what I thought about for my real estate business as a rhythm that you can have in sync with real estate,” Griffin said. “I wanted something that military people would instantly get. They would see Cadence and instantly connect my affiliation with the military.”

She earned her real estate license in 2004 and had been practicing in the surrounding areas until she took the leap in 2020 earned her broker’s license and opened her own real estate business. Griffin welcomes everyone especially her fellow veterans to Cadence Realty. She is licensed in Georgia and Alabama and a broker in both states.

“I like to work with the veterans because they don’t know a lot about the benefits they have being a veteran and buying a home, I educate them on that. Some veterans have never even used their benefits, they don’t know where to get started,” Griffin said. “I wanted [Cadence Realty] to be something that would never forget the veterans. Second of all, it was something that I wanted to do, because I had been in the business for a long time and I just thought, you know, why not?”