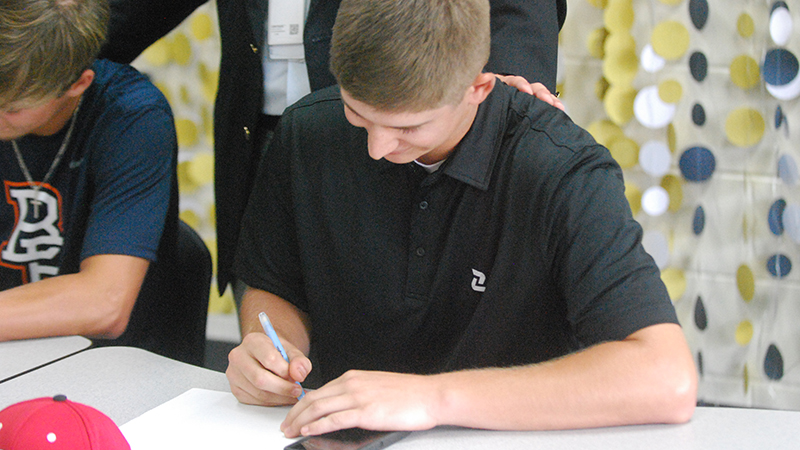 Baseball continues to thrive in Troup County and last week was another example of that. Two Troup High players and a LaGrange High player all had signing days at their respective schools last week.

Mason Atkinson is heading off to Mount Vernon to play ball at Brewton-Parker College. The recent Troup graduate is leaving some big shoes to fill in center field. Atksinon was a major focal point on the Tigers team that set the school record for wins–29– in 2021. Atkinson is willing to do whatever it takes to win and even played out of his preferred position his junior and senior season. Last Wednesday, he finally got to celebrate his Tiger achievements with his friends and family as he got his official signing day.

“Mason reminds me a lot of myself,” Troup head coach Tanner Glisson said. “He’s real energetic and there is never a dull moment.”

Joining him on Wednesday was teammate Daniel Martin, who was also a key contributor on that 2021 team and helped lead the Tigers to back-to-back AAAA state quarterfinal appearances. At Troup, Martin was the no. 1 pitcher his senior year and was often deployed in the infield as well.

“I’m glad me and Daniel got to do this together,” Atkinson said. “We’ve been playing tee ball all the way up together and it’s fun to have this special moment together.”

At LaGrange College, his new head coach David Kelton sees him as solely a pitcher. While he does not throw with a lot of heat, the right-hander can pound the strike zone and now gets to continue his baseball career in his hometown with a team that just made the NCAA Division III World Series semifinals.

“These guys were raised right,” Troup principal Niki Watts said. “These are two of the hardest working, kind, humble and genuinely good guys you could encounter.”

On Thursday, Region 2-AAAA player of the year Colton Espositio got his official signing day in front of his friends and family. A monumental achievement for a player who had a stellar senior season.

“I want to thank everybody who came out here today, it means a lot, it really does,” Esposito said.

The LaGrange graduate will be joining Martin at LaGrange College in the fall. While Martin is likely to see playing time because of the Panthers lack of depth at pitching, Esposito is going to have to fight to get into a stout offensive lineup. He his not scared of the challenge and is embracing the competition going into his freshman year of college.

“He had to really rework his swing to be successful,” LaGrange head baseball coach Donnie Branch said. “In the last two years he reworked his swing and made himself region player of the year.”

All three players will be staying close to home as two–Martin and Esposito– will be playing in their hometown while Atkinson will be playing ball around three hours from. This allows all three of their families to see them play college baseball which was a huge selling point for all of them. Three talented baseball players from the area are keeping their talents in the peach state.

“I get to stay home and play at the next level, what’s not to love about that?” Martin said.