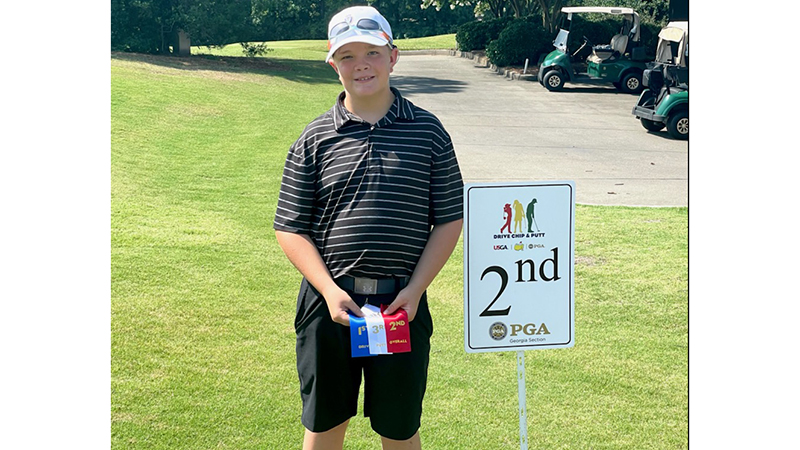 Jasper Spears has been working hard on his golf game over the last year. A summer ago, he could barely hit the ball. Now, he is tearing up drive, chip and putt competitions.

“He would miss the ball entirely in the beginning and now he’s mad when he misses the fairway,” Jasper’s dad Josh Spears said.

Jasper had never hit a golf ball in his life when Josh took him out around a year ago. Jasper’s ability has grown tremendously since then has he has working on his game multiple times a week on average.

Earlier this month, Jasper took part in just his second competition at the sub-regional qualifier in Columbus.

“I was very nervous,” Jasper said.

This was only the second time that Jasper had hit golf balls in front of a crowd after a separate competition earlier this year.

“I just breathe and try to stay calm,” Jasper said.

Now, Spears plans to work on chipping so he can become a more well rounded player.

Josh is a member of the Highlands Country Club where the young Jasper gets most of his rounds of golf in.

Spears has been making waves in the local golf community with coaches already having their eyes on his ability.

“I have been contacted by many of the coaches asking me which high school he will be going to,” Josh said with a laugh.
Jasper had eyes on being a baseball player when he was younger, but it did not work out and subsequently he started playing golf with his father. Jasper fell in love with the sport and has not looked back over the last year.

Jasper will take part in the next round of the drive, chip, and putt at the TPC Sugarloaf course in Atlanta next month.

“We are going to go up there and compete and if he gets beat by better golfers than so be it,” Josh said.