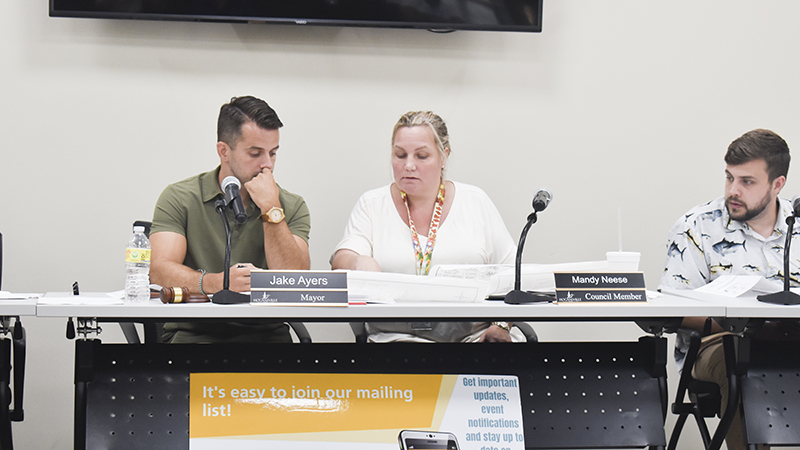 HOGANSVILLE – Minor progress was made in Hogansville Tuesday night as the Hogansville City Council tabled several items, including approving a bid for the construction of backbone water tank system on Bass Cross Road, a crucial piece to improving water quality for the city’s residents.

However, these decisions, as noted by city council members, were needed to obtain better information on each project.

In the case of the waterline project, council members did not immediately have information on the project’s construction timeline, as well as a guarantee from the construction company that the prices of materials would increase. Councilmember Mandy Neese, an engineer, asked the item be tabled until the council’s July 18 meeting.

Interim Hogansville City Manager Lisa Kelly clarified that all bed contracts have a price lock for 120 days after the bid award.

The city of Hogansville recently received bids for the Bass Cross Road waterline project, which would extend the existing waterline from Highway 29 at Bass Cross Road to the entire length of East Main St. to near the existing water tower known as the “interstate tank.” Kelly noted the line is the backbone system needed to alleviate several water pressure-related issues ongoing throughout the city.

“It will help us get water from point A to point B and allow us to withdraw [water] allowed in our current agreement from the city of LaGrange,” Kelly said.

Hogansville received three bids for the waterline project, the lowest and most recommended of which came from Smith Pipeline, Inc. at $2,189,230. Funding will be paid by Georgia Environmental Finance Authority [GEGA] loan/grant funds.

This project excludes the 500,000-gallon water elevated storage tank on Pine Street, Kelly said, though this is part of an additional phase in the waterline project. The tank is still under design. Total funding for the entire project is anticipated to be $6,633,700 and funded through a combination of GEFA grant/loan and CARES funding. Kelly said the project had already been approved by Troup County.

Council additionally tabled a request from WJH LLC, who are the developers for the Mallard Lake subdivision project, to extend the city’s front yard setback variances for four of its unbuilt properties at the  subdivision.