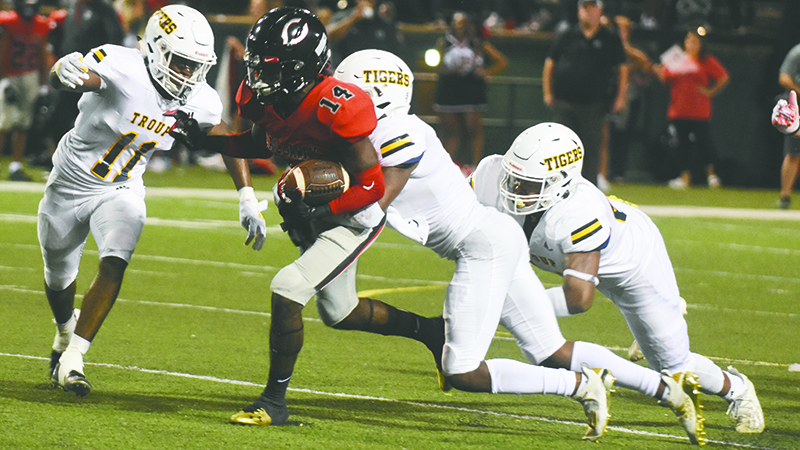 It is a new era of football in Troup County once again, as all three public high schools will enter new regions. After getting used to their common opponents, all three teams will have almost an entirely new slate of games this season. Yes, LaGrange and Troup are in the same region and Callaway will face off against familiar foes in Troup and Opelika–which is a burgeoning rivalry– but by and large, it is a new slate of opponents for each team.

Last season Troup and LaGrange spent most of its region schedule last year on the road in Columbus as Hardaway, Spencer, Columbus, Kendrick, Shaw, Carver and Jordan were all based out of the area. This season will see the two local teams travel up to the greater area of Atlanta to play their region road games. Whitewater, Stone’s Mill, North Clayton, Riverdale, and Fayette County are all in the new Region 4-AAAA and are located in the greater Atlanta area. The last opponent in the region is Trinity Christian, located in Sharpsburg, which is just outside the greater Atlanta area.

The Tigers had LaGrange and Callaway on the road last year which helped keep their travel distance limited. After traveling only 188.8 miles across four away games last season, the Tigers are in for a much longer road schedule this year as they will accumulate 362.4 miles across their four road games this season. The shortest road journey Troup will have this year will be their opening day game against Harris County, which will be 47.2 miles there and back. Still, the Tigers will play four of their seven region games and six of their 10 total games at home in Callaway Stadium, including the season finale against LaGrange.

One of the major reasons for the less travel distance is the fact that the LaGrange-Troup rivalry game will have the Grangers serve as the road team. The Grangers will have six of their 10 regular season games for the second straight year at home. LaGrange will have to travel further on a single trip than they did last year in two games this season– against Smiths Station (50.1 miles) and Whitewater (50.6). LaGrange will also have a lighter travel load this year after going 364 miles last season across four games, they will be traveling 285 miles across the same amount of games this season.

Callaway only had four other regional opponents to deal with last season in Bremen, Haralson County, Heard County, and Temple, but will be in a larger region this year with six other teams in the region– Redan, Columbia, Towers, Eagle’s Landing Christian Academy, Mcnair, and Landmark Christian. The Cavaliers new region expands across the greater Atlanta area, where it had previously included teams from across the rural areas north and east of LaGrange.

Callaway was able to get away with only three away games last season, where the team accumulated just 223.2 miles of travel which is a far cry from the 657.6 miles the Cavaliers will have to travel across three road games this year. The heavy road schedule largely results from having to play a larger regional schedule. The Cavaliers will also be on the road against Troup this season which will not be a significant travel and could essentially be considered a home game. Unfortunately, four of the Cavaliers road games–Cedartown, Redan, Columbia, McNair– are significantly longer road journeys than their furthest trip last season against Bremen. Cedartown is up near Rome and the other three teams are Region 5-AA opponents from the Atlanta area.

As regions shift in Georgia every two years, it often completely upends teams year-by-year schedules. While LaGrange is fortunate enough to decrease its travel distance, it is not the same for the county’s other two teams. Troup will have to travel nearly 140 more miles over the same amount of home games as last season, while the Cavaliers will play a whopping three more games on the road than last season. An expanded region sees the Cavaliers travel 434.4 more miles this season than last year. It will be even more of a grind this year for the 2020 AA state champions, but if any team is up to the challenge, it will be Pete Wiggins’ team who are coming off a trip to the AA state semifinals last season.