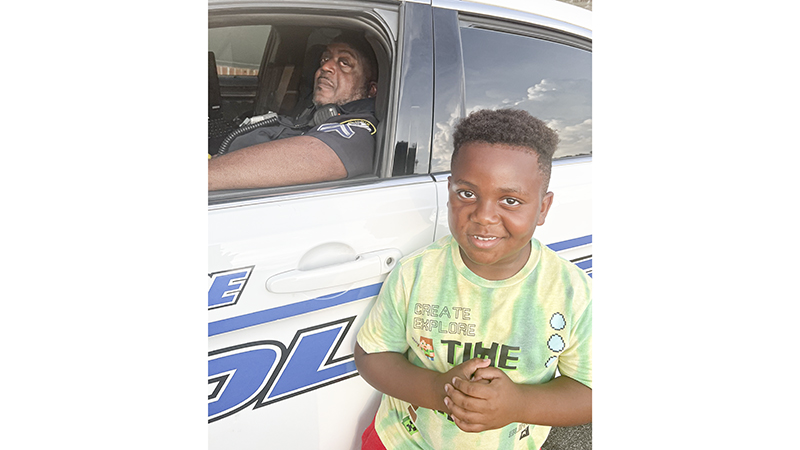 Special Patrol Officer Greg Civers sits in his patrol car a final time before he officially retires from the LaGrange Police Department following three decades of service. With him is his six-year-old son, Greg Civers, Jr., who also wants to be an officer one day.

Greg Civers’ persona can be summed up into one phrase: unprecedented dedication. Civers has severed in various capacities with the LaGrange Police Department for over 30 years and he served his country in the U.S. Navy for nearly eight.

On Wednesday, July 6, Civers’, badge 991, official service to both came to end when several of his fellow officers gave him a final send-off via radio. “I looked at it like, I’ve served my country and my community,” Civers, recalling the over two-minute send-off, said. In the patrol car with him was his six-year-old son, Gregory Civers, Jr. His wife, Barbara, was filming the send-off. “When you know that you gave it your all, and I’ve always been fair but stern, helped rectify it. That’s all I’ve known. It was a good tour overall.”

Civers’ service began with his country. At the age of 17, he enlisted in the U.S. Navy to respond to the ongoing Cold War. Due to still being a minor, he had to receive written permission from his mother. During his time with the Navy, he received specialized schooling to learn how to create the components of nuclear weapons.

Years following the Cold War, Civers said he still felt bound to the Navy in case more conflict broke out. However, he soon received a call from  former LPD Chief Gary Sheppard who offered him a position following his return from his recent deployment. He accepted the possition and never left.

While working as an investigator, detective, corporal and sergeant the LPD, Civers bore witness to rising tensions of the time, none so prominent than the changing views of police officers both locally but throughout the country.

“[The LPD] had to change with the times. Now, there’s so much political [aspects] that make it harder to do your job,” Civers said. “We’ve never mistreated anyone, but you used to could be more stern with someone and get a person’s attention back then.”

In November 2021, Civers was one of the initial officers who helped navigate traffic from Sunny Point neighborhood during an intense two-day standoff. A man had barricaded himself in his home after firing several rounds at law enforcement in LaGrange, the result of a transpired domestic situation. Civers and another officer were posted outside of the neighborhood deterring cars from re-entering the neighborhood, quickly gaining the ire of several residents.

“People take everything out on us when [we were] trying to explain the situation to them, and if anything happened to them, it was our fault,” Civers said. “It used to not be like that. People just have less respect for [police officers] but we’re people just like they are.”

Despite the changes in police policy and outlook, Civers said there is still room to make an impact on those who need it.

“The people who know you and count on you, they know you’re not going to lie to you,” Civers said.

With retirement now at hand, Civers plans to focus most of his time with his family, which consists of his wife and five children. His youngest son, Greg Jr., has already begun to show an interest in becoming an officer like his father.

“He can already tell you about policing. He loves it,” Civers said. “I’m teaching him the way I was raised, that you respect people and have manners, and you treat people the way you want to be treated. He’s the type who really wants to follow in his dad’s footsteps.”

LPD Cheif Dekmar noted Civers’ dedication to the force and wished him well in his retirement.

“As a valued member of the LaGrange Police Department, [Civers] has served our community in numerous positions and in numerous ways over the course of his career,” Dekmar said. “He has made a difference in the lives of many of our citizens. That service is his legacy.”