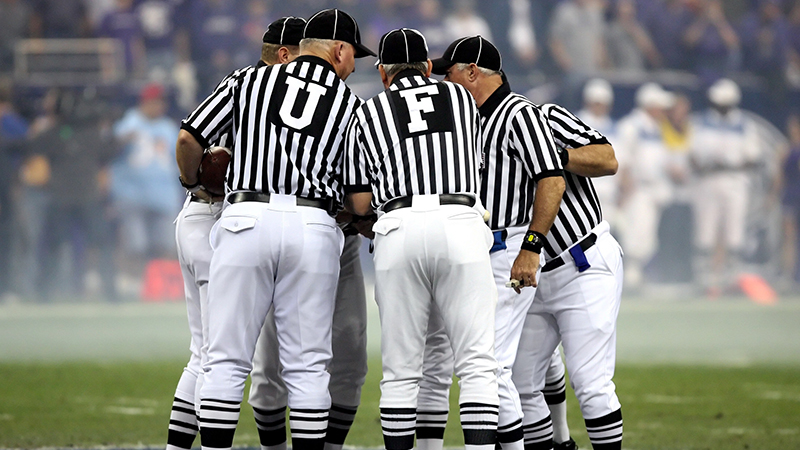 With a referee shortage in full effect from high school sports down to the youth level, it is time to start treating referees with more respect. While participants on the field are typically more than civil, spectators and parents are often less.

Unruly parents and spectators at games have created a toxic environment for referees. It should not be on the school, coaches, or organization to shield the referees from over the line behavior. It is up to the adults in the stands to start acting like just that, adults.

According to the New York Times, from 2018 to 2021, an estimated 50,000 high school referees — roughly 20 percent — quit. The astounding decrease in referees can be directly tied to bad spectator behavior.

Bad spectator behavior is prevalent across the nation, and Troup County is no exception to that. Even in the Spring, a Troup versus Callaway soccer match had to be canceled because of the lack of referees. In the spring, two refs had to officiate multiple basketball and soccer games instead of the usual three. This is directly tied back into bad spectators.

Officially Human, an organization that promotes the respect of referees, conducted a survey of nearly 19,000 officials across 15 states in 2019. When asked what their top reason for quitting would be, 60 percent said verbal abuse from parents and fans.

Sometimes it goes beyond that. Earlier in the spring, just up the road in Atlanta, a referee was chased and beaten up after a game.

As parents have begun dumping more funds into their children’s athletic endeavors and the money involved with getting a collegiate scholarship has increased, parents have become more hostile.

The problem has reached the very top as solutions are trying to be found. The National Federation of State High School Associations (NFHS) held a summit earlier this year to discuss this very problem.

The NFHS estimates that around 50,000 referees have departed the avocation since the start of the COVID-19 pandemic in early 2020. They have been struggling to fill the gaps left by these departures and have seen a steep decline in the number of registered referees in the country since COVID started.

“Unacceptable behavior by coaches, parents and other spectators has pushed many officials to the sidelines. After all, why would anyone who is trying to help high school students compete on the fields and courts want to be harassed, ridiculed and abused – sometimes even physically – while trying to do their jobs?” NFHS Chief Executive Officer Dr. Karissa Niehoff wrote in an op-ed in April.

Sometimes referees make mistakes – Just like me and just like you and just like your kids do when they are playing sports. The referees make the correct calls the majority of the time, but the mistakes are always more glaring. So the next time a referee makes a mistake at your child’s game, bite your tongue, show some pride and give the guys and girls in black and white the respect they deserve.