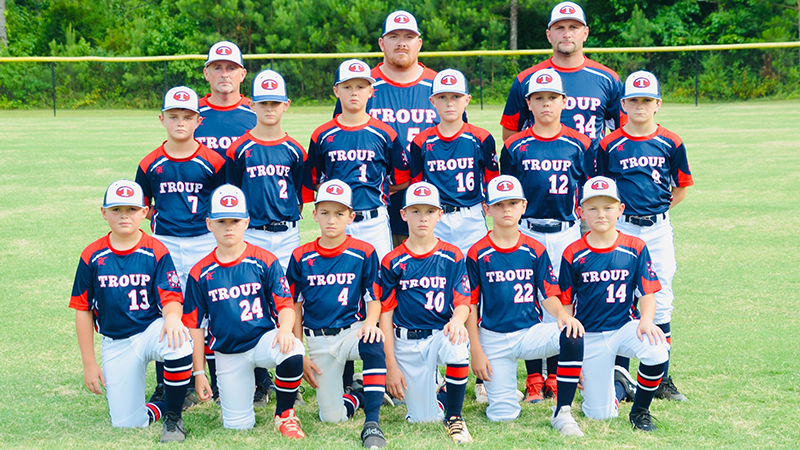 Some Troup County baseball players got a lifetime chance as the Troup National and American 10u All-Stars were in Wrens this week to participate in the Georgia Dixie Youth tournament.

The American team went into the tournament with a lot of youth as only about half the team were 10, and the other half were under 10.

“We got a really good defensive team,” coach Russell Yeatman said. “We never give up. We have a lot of heart.”

“We fought hard and it really shows a lot about these boys,” Yeatman said.

Despite the losses, the 12 players got the chance of a lifetime. It was a lot of hard work for them as the team practiced two hours a day, five days a week for the last month. The 12 players on the American team consisted of Austin Hill, Charlie Riley, Colton Richardson, Chipper Yeatman, Chambers Glisson, Isaiah Bishop, Ethan Cotton, Reagan Pannell, Tate Schmitt, Sam Brunair,  Ben Sells, and Carson Atkinson. The team was led by their three coaches, Shannon Cotton, Cory Atkinson and Yeatman.

“This was the first time most of these guys had played in a tournament like this,” Yeatman said.

The American team was not the only Troup 10u team in Wrens this week as the Nationals team also joined them. Like their American league counterparts, the Nationals were made up of 12 all-stars from the Troup 10u 2022 spring season. The 12 players that made up the National team were Harper Calhoun, Woods Griffin, Carter Harrill, Bentley Henderson, Grady Kelton, Jacob Kemper, Ben Lupien, Sammir Pope, Hatcher Ricks, Colton Shelnutt, Andrew Tanner, and Mason Ward. The team is coached by Steven Tanner, Johnny Ricks and legendary LaGrange College head baseball coach David Kelton.

Regardless of the outcome of the Nationals game(s), both teams have represented the Troup area well. The teams worked tirelessly over the last month to acclimate with new teammates and prepare for a major tournament like this.”I’m just proud of these buys. They did not come up here and get blown out and although a loss is a loss, these boys competed their tails off,” Yeatman said. “I could not ask for a better group of young men to fight the way they fight.”