Troup, Callaway, and LaGrange in for new battles with latest region changes 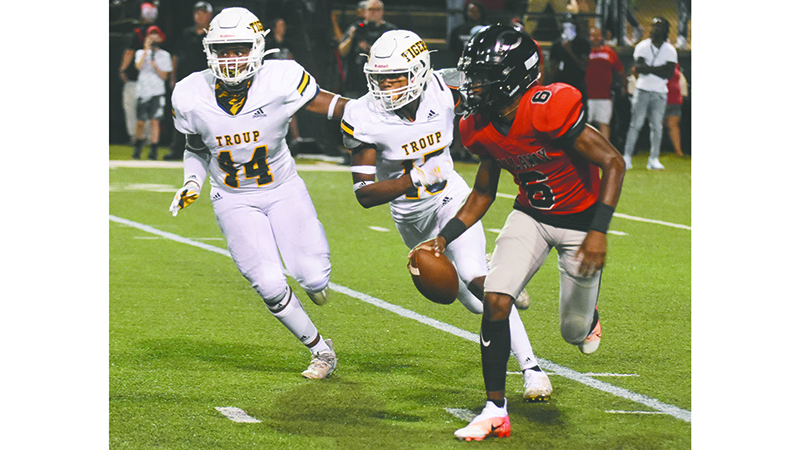 Football season is nearly upon us as all three public high schools – LaGrange, Callaway, and Troup – are entering new regions, which means that all three teams will be taking on many new opponents this year.

On the surface, Callaway’s strength of schedule is not that difficult as their opponents combined to win just 48.7% of their games last season. This is a bit deceptive as Eagle’s Landing Christian Academy went 7-7 overall last season but went to the semifinal in the A-Private classification, where they lost in overtime. The only team in Callaway’s new region that finished with a winning record was Columbia, who finished the season 8-4 and exited the AA state playoffs in the second round. Callaway’s toughest games will come in the opening three weeks of the season.

The Cavaliers open the game with Opelika, a AAAAAA team from Alabama that made it all the way to the quarterfinals of the state playoffs last year. The second game of Callaway’s onslaught to begin the season is against AAAA 2021 semifinalists Cedartown. Week three will be against Troup, who went 8-3 and took a tough one score loss in the opening round of the AAAA playoffs last season.

Despite Callaway being in an expanded region, it appears that Callaway will be moving into a region with some weaker opponents. Four of the region opponents for 2022 – Redan, Towers, Mcnair, and Landmark Christian – had three wins or less in the 2021 season.

Troup will not have as many new faces to contend with this season but will still be entering a new region with all new opponents outside LaGrange High School. The Tigers have a much tougher slate of opponents on paper than Callaway, as their ten regular season adversaries combined for a win percentage of 68.1% last season. The major reason for this is the fact that last year’s region (outside of LaGrange) won 44.6% of their games, while the new region (not including LaGrange) in 2022 won 69% of their games in 2021. New region foe North Clayton went 1-9 last season, while the other 2022 region opponents all had winning records.

Troup’s non-region opposition are no pushovers either. All three non-regional opponents – Harris County, Callaway, and Hardaway – all had a winning record last season and a playoff appearance in their respective classifications.

LaGrange is in the same boat as Troup as they jump from a relatively easy region to one with very little weaknesses. The combined win percentage of LaGrange’s 10 opponents is 60.4%. While a harder schedule than Callaway’s on paper, it still trails the brutal schedule that Troup is undertaking this season. The reason it is easier is the non-region schedule that LaGrange is undertaking. The three non-region teams to start the season – Smiths Station, Northside and Upson-Lee – all had a losing record as they combined to go 10–19 overall last season.

Like Troup, LaGrange will be in a much more difficult region this year. For example, Trinity Christian went 14-0 and won the A-Private state championship last season over perennial powerhouse Prince Avenue Christian. Whitewater lost in the quarterfinals of the AAAA state playoffs, while Starr’s Mill and  Riverdale lost in the second round and Fayette County lost in the opening round. Seven of the eight teams in Region 4-AAAA made the playoffs in their region last year. Only four will make it this season.

Football season is right around the corner. Troup has entered into a harsh new region with LaGrange, but Troup will be taking on a more difficult non-region schedule. Callaway is in for an easier schedule on paper, but it is just that on paper. Football is unpredictable, and 2022 will hold its fair share of surprises.