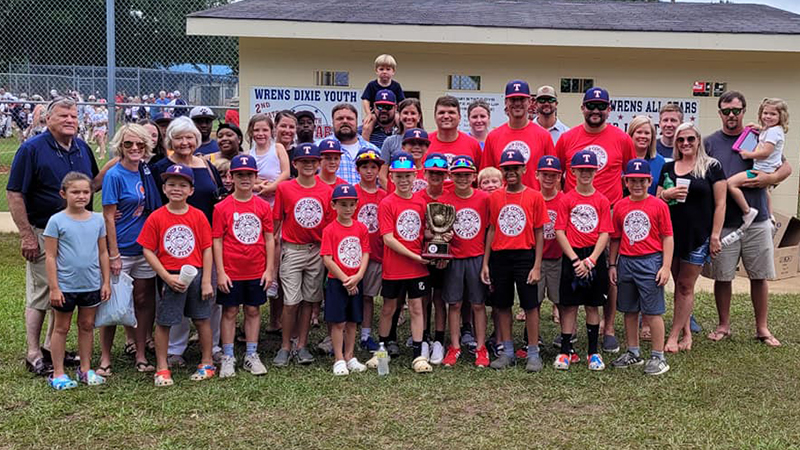 The Troup 10u Nationals made the LaGrange area proud with their accomplishments last weekend at the Georgia Dixie Youth tournament in Wrens.

“The kids battled and competed every inning and gave everything they had,” coach Steven Tanner said. “It was a phenomenal few days with the team.”

The Nationals routed Columbia American 9-2 in game one before succumbing to North Macon 8-1 in game two. On the brink of elimination, the Nationals won their elimination game 17-5 to set up a date with Perry in the semifinals on Saturday. The Nationals were leading 6-5 when rain swept in and caused a multi-hour delay. The Nationals traveled 45 minutes back to their hotel in Augusta, where they stayed for a few hours before making the 45 minute trek back to Wrens in the evening to finish the game.

Perry, who had not lost a game in the tournament up to this point, came out of the weather delay hot and poured it on. Perry quickly took an 11-6 lead, but all hope was not lost for the Nationals. The team stormed back in the final inning to cut the Perry lead to 11-9 and with the tying run on first base, they could not quite complete the rally but showed a fighting spirit to the bitter end.

“It was a group effort,” coach Johny Ricks said. “They never stopped fighting and I think that’s a huge testament to how much they love the game, and I couldn’t be more proud of them.”

The team finally got to display their passion in front of a large crowd this weekend after working their tails off for a month to get into this position.

Getting the 12 players – Harper Calhoun, Woods Griffin, Carter Harrill, Bentley Henderson, Grady Kelton, Jacob Kemper, Ben Lupien, Sammir Pope, Hatcher Ricks, Colton Shelnutt, Andrew Tanner, and Mason Ward – back and forth and keep them focused and motivated was a monumental task. Ricks and Tanner were a large part of that and were aided by legendary LaGrange College coach David Kelton.

“Having his expertise and knowledge around was huge,” Tanner said.

It was not just the coaches that made this all possible, it was a village of families that came together and made this all happen. Without them these young boys would not have had this experience of a lifetime.

“We had a great group of parents that took care of us,” Ricks said. “They made sure we had a meal for us when we got back to the hotel, and I’m not sure what we would have done without them.”

Despite being eliminated from the tournament with a third place finish the Nationals were asked to stick around for the trophy ceremony after the final games were played. Confusion turned into elation when the team was announced as the winner of the Tommy Henry trophy for sportsmanship. The Nationals players’ character was easy to see as the team conducted themselves well before and after the games – holding a prayer circle after every game to give thanks regardless of the outcome of the game.

“There’s things bigger than wins and losses in sports and doing things the right way is absolutely one of them,” Ricks said. “For us as a community and a team, this is something we can be proud of.”

“It shows you what kind of kids they are,” Tanner said. “They would pray before and after every game and show how to act on and off the field.”

After a long spring season that saw these 12 kids be selected as National team All-Stars, it was a laborious June as they practiced nearly every weekday for over a month. Now, the players will get some time off before starting a rec season in the fall. The players will disperse across the county, state, etc. from here, but the memories of that one weekend in early July 2022 will live on forever.