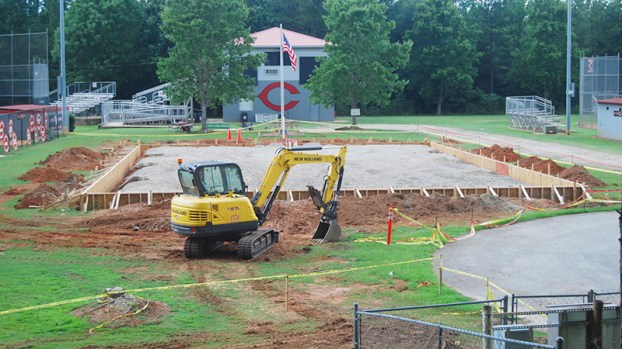 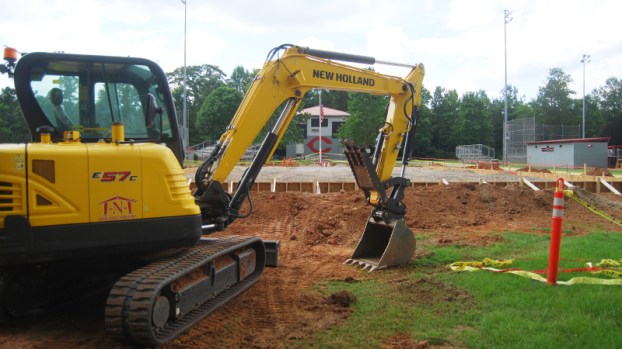 EDITOR’S NOTE: This story has been edited since the original version published, including an updated timeline.

Callaway baseball and softball just took one step into the future as work on the school’s new hitting facility has commenced. While labeled a hitting facility, the new amenity will be so much more than that.

“We’ll have four tunnels that we can break into eight tunnels if we drop a net in the middle,” Callaway baseball coach Dusty Hubbard said. “We’ll also be able to take the nets out and put portable pitching mounds in there.”

“It’ll be great for the kids, but it will also be a storage space for our pitching machines and other equipment to help make sure it doesn’t get stolen.”

Now, when inclimate weather strikes instead of canceling practice, the Callaway baseball and softball teams

can get some valuable work indoors.

“There were multiple times last year that we had to cancel practice multiple days in a row,” Callaway softball coach Josh King said. “This means we will not have to do that.”

It is a long time in the making as the athletic department at Callaway has wanted a hitting facility for years.

“This has been something we’ve been talking about since I got here 17 years ago,” Hubbard said.

Previously, the Cavaliers had a small two tunnel makeshift facility. It served its purpose, but the baseball and softball programs at Callaway were in need of something more to take the step to the next level.

The energy is palpable as players and coaches alike get excited for the chance to use the new facility.

The facility is well underway but is still a work in progress. The plan was to have it opened by the beginning of the school year but the availability of materials has pushed that timeline back.

The facility is a huge step in the right direction for two of the athletic programs at Callaway. The Cavaliers softball team has fallen in the first round of the playoffs the last three seasons. The new facility will offer them more training time and space as they try to improve and go deeper in the playoffs.

After a run of three straight semifinal appearances, the Cavaliers baseball team exited the playoffs in the quarterfinals of the 2022 AA state playoffs after a tough series loss to eventual state champions, Vidalia. This new facility will grant the baseball team a more level playing field with the other top contenders in AA.

“People don’t understand how valuable it is to be able to go in and hit indoors,” Hubbard said.

After a long and winding road to get the money for the hitting facility, its grand opening is now on the horizon. The Callaway softball season begins Aug. 15 against Temple while the baseball team awaits their official schedule but will start their season in early 2023.