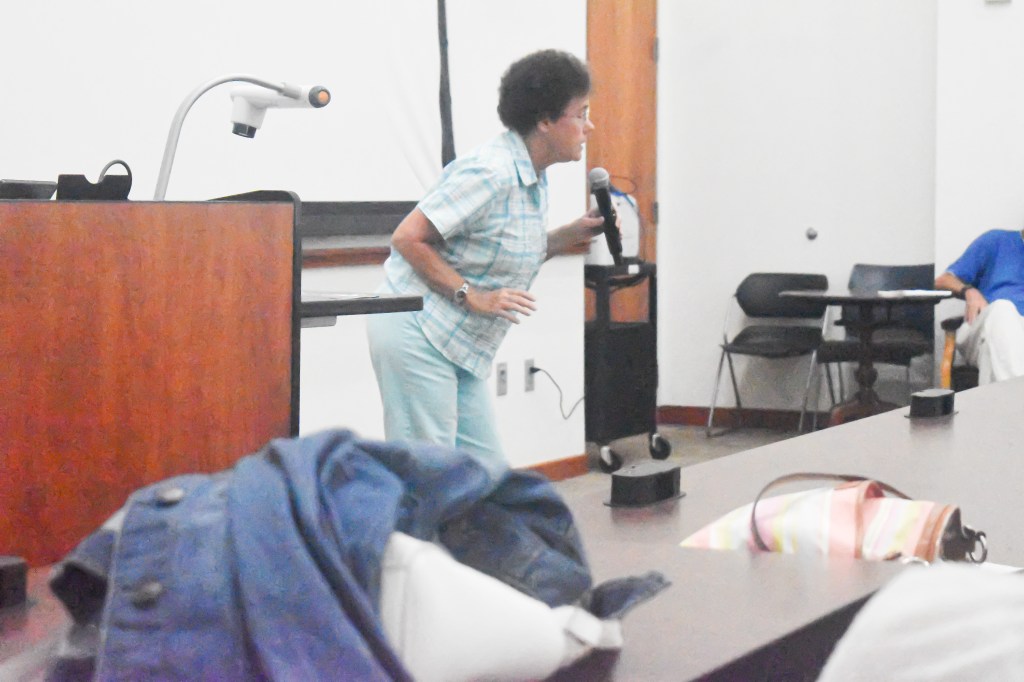 This week Davis led the workshop attendees in the art and skill of great storytelling. One thing he hopes they learned is the power of self-discovery and creativity.

“I want them to discover that they already have many, many stories in their head that they don’t realize are there,” Davis said. “I hope they learned how to find some of those stories, and then understand what they mean in terms of who are you, and where did you come from and where are you going in your life?”

On Wednesday, guests to Davis’ workshop were in for an afternoon of humorous and meaningful storytelling by Jean Woodall, Randall Harris, Robin A Reddick, who were also attendees of the Davis Storytelling Workshop.

“During this workshop, we were given a chance to voice and draw a picture of people in our past, people in our lives, and things that mean something to us. I like to do the humorous route, so I enjoy telling stories about people I know,” Reddick said.

“I’ve become appreciative of people who are really good at storytelling. People who are good storytellers not only have to be born with a storytelling gene, but they have to work on it, which is why we’re here. We’re learning from a master storyteller,” Harris said. “This is a hobby for all of us, and we take it seriously. We’re learning how to do it better. People spend all their time looking through cell phones. They don’t sit on the front porch and tell stories anymore.”

As a storyteller with a career spanning over 20 years, Davis said the most influential thing to him and his career was listening to other people tell their stories.

“I don’t think I learned much when I’m talking,” Davis said. “I think when it’s my turn to sit down and listen to other people, that’s when I learn because the other people’s stories remind me of people I’ve once known, or places I’ve been or something that happened to me that I never realized, oh, there’s a story!”

The workshop was part of the larger Azalea Storytelling Festival, which held its 25th festival this past March. The festival features local, state and national storytellers who entertain hundreds with tall tales and comical, tragic or thoughtful glimpses of the storyteller’s life.

Many of Davis’ students and attendees came out to support their fellow peers. Among the students in attendance was Clara Keith Brown.

“What really stuck with me was the opportunity to get to learn about other people’s experiences, what is important to them, what has shaped their lives through in a very safe, comfortable, courteous environment,” she said.

As part of the Hills & Dales Founders Day celebration, three students from the workshop will present their stories on Friday, July 15, from 7 p.m. to 8 p.m., in the Pecan Grove. On Friday, attendees are asked to bring a chair or blanket as the event will be outside.