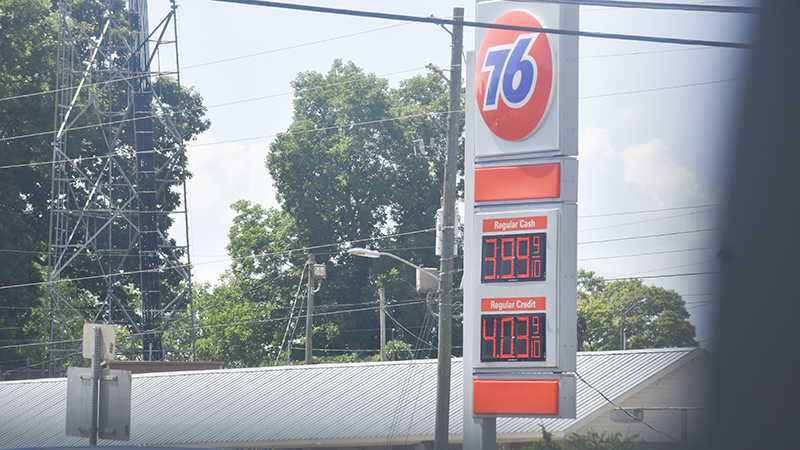 Fuel prices are going down around the state and around the country, but the savings haven’t quite registered in Troup County yet.

According to AAA, the average price of gas in Georgia is $4.09, but several counties — particularly those to the south and east — have much cheaper gas. Some of the averages are even below $4 a gallon.

In Troup County, the average is $4.22, according to AAA’s Friday update. Out of 159 counties in Georgia, Troup has the 16th highest average price. Clay County, south of Troup, had the highest average at $4.49 per gallon.  Sixty two Georgia counties have gas price averages under $4 a gallon.

“Currently Troup county is sitting at $4.22 at this point. That is 13 cents higher than what the Georgia average gas price is which is sitting at $4.09,” Waiters said. “Nationally, today gas prices are sitting at $4.57, meaning you guys (Troup County) come in actually 35 cents lower than the national average.”

There is a lot that impacts gas prices locally within the United States and globally. Waiters said the cost of crude oil impacts about half of what you pay at the pump.

“The reason why we have been seeing gas prices fall within the last past week is because the price of crude oil has been trending downward,” Waiters said.

In March, Gov. Brian Kemp suspended the gas tax for the state and he recently extended that suspension through August. That has helped prices, but other factors play a role in higher prices as well.

“[Stores] may not be getting their fuel from the same manufacturer so to speak. When it comes to gas, it also depends on the demand in your area,” Waiters said. “Demand, local taxes, as well as the price of crude oil all plays in part in why you see gas prices rise or fall or why gas prices may be more expensive in one area and not as expensive in another.”

“The supply issues are not as bad as they were a couple of months ago, but it’s better now,” Singh said. “The tax policy has really helped us. When the prices were going up, we were losing a lot of money in gas sales because we were not able to raise the prices of the gas as much as the prices were going up. We were buying and losing a lot of money. Because of the tax laws, it has helped us stabilize the business and helped us make some money and get sales.”

While the decrease in prices helps, some local citizens feel as if this is a respite before we see a rise in gas prizes again.

“I think the suspension on gas has been great for the community, not everyone can afford $5 a gallon every few days,” said local Troup County resident Shelby Cunningham. “It’s been a relief to not have to stress over whether or not I can afford gas to get to work or go anywhere.”

“Gas going down as been good on my pockets, but I can’t help but to wonder when I’ll feel the burn in my wallet again,” local resident Duke Janson said.

According to AAA there are some ways consumers can save money the pump: combine errands, shop around for the best gas deals, Utilize the AAA app to see what gas prices are,  pay with cash, remove excess weight from your car so you can get better gas mileage and enroll in fuel savings programs.

“Fuel saving programs help a lot because with those different programs, you can actually save up to 30 cents per gallon at the tank,” Waiter said.