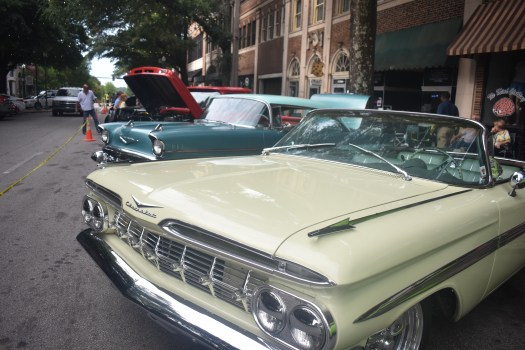 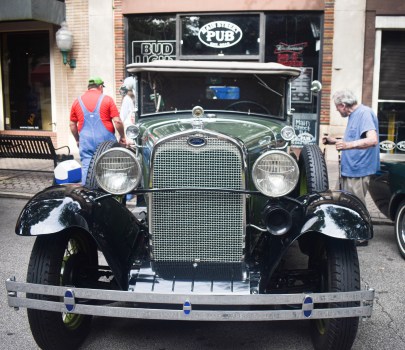 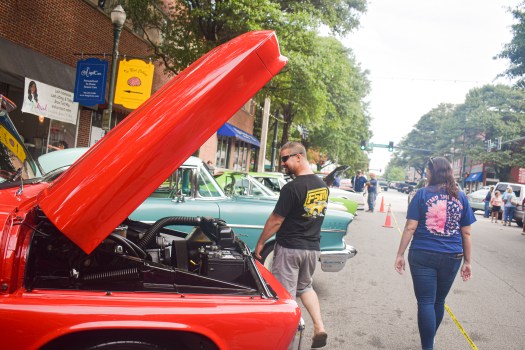 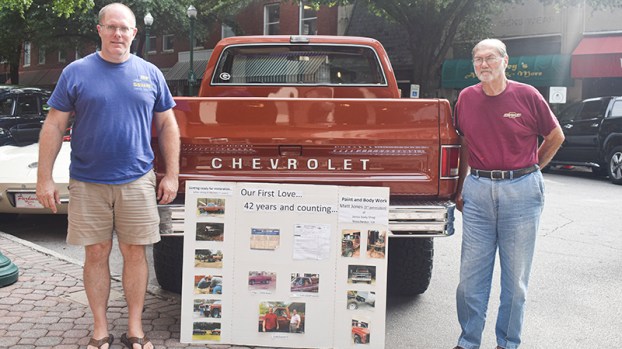 Daniel and Neal Murray stand with the their 1977 Chevrolet, the combined effort of several decades worth of time and dedication. The Murrays featured the automobile alongside several other classic cars at Saturday’s classic car show downtown, a prelude the LaGrange Legacy Museum on Main’s automobile history exhibit. 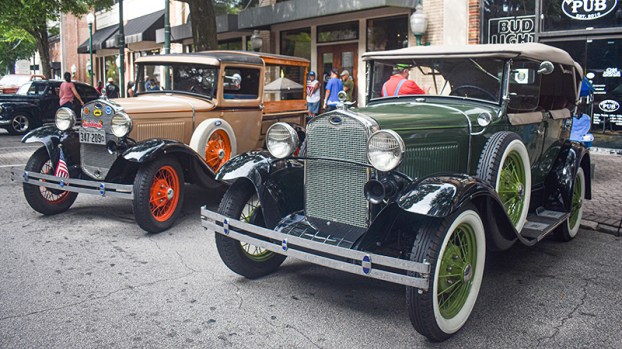 As the automobile industry began to spread its roots in the earliest part of 20th century America, Troup County, like many smaller communities, was slow to accept this newest invention of the times. However, Troup County eventually began to trade in the horse and buggy for the Model-Ts and other automobiles that became available to the area.

The history on Troup County’s love/hate relationship with cars is documented in the Legacy Museum on Main newest exhibit: Hitting the Road – Shifting Through Local Automobile History. This exhibit, which stretches through the majority of the museum’s first-floor exhibit area, presents a  view of the automotive history nationally and in Troup County, including and some of the area’s oldest automobile establishments.

According to information from the exhibit, documented by the Troup County Archives, the premier car dealership in LaGrange was the LaGrange Automobile Company, established approximately in 1907 on Broad Street. The company offered a then-popular service called “cars for hire,” which allowed citizens to hire a chauffeur to drive them around town.

Bill Johnson Motors was another icon in local car dealerships. The car dealer is considered LaGrange’s oldest operating dealership in operation, according to the exhibit. Today, they are located on Commerce Avenue. Lukken Chevrolet as well was a prominent dealership on Main Street in 1965. The dealership relocated to New Franklin Road in 1966 where it continues to operate today.

The introduction of these dealerships also gave way to service stations where workers would clean and fill up a customer’s car. The exhibit takes special note to Woody’s Service Center, operated by the Woody family, which managed to survive the bulk of the changing industry for 50 years before closing its doors for good in 2019.

Though the automobile industry offered new and exciting changes and economic advantages locally, it also created noticeably damage in its wake. Car accidents were extremely common during the automobile’s introduction. A universal issue involved the cohabitation of cars and horses, which would become easily spooked by earlier models’ loud engines. Local articles on display in the exhibit showcase some of the most noticeable accidents that occurred in the area, including early fender-benders on Whitesville Road in the 1930s and even the death of a Lanett man on I-85 and the death of two motorists in Hogansville in the early 1900s. With these tragedies also came solutions. For example, Hogansville gained its first traffic light on Main St. and Hwy 29 to alleviate “traffic hazards” caused by new traffic.

Today Troup County is home to several prominent automobile distributors, including KIA Georgia, which opened in West Point in 2009, Toyota and Honda.

Shannon Johnson, executive director of the Troup County Archives, additionally noted it is not currently known who owned the first car in Troup County.

Hitting the Road – Shifting Through Local Automobile History. will be on display at the Legacy Museum on Main until June 2023.