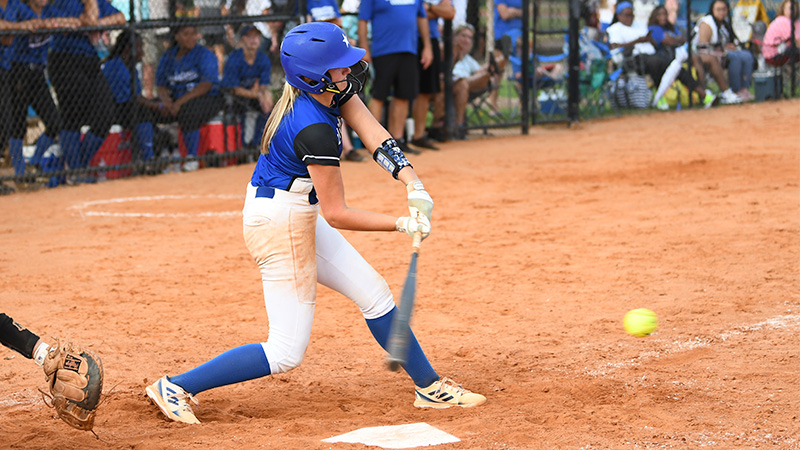 The LaGrange High School softball team earned its first two wins of the season on Friday as the Grangers took part in the first day of the Callaway Classic. The first game saw head coach Craig Mobley earn the first win of his career as a head coach. Ever so humble, he credited his girls and a special guest for propelling his team to a doubleheader sweep.

“I want to shout out to Steven Tanner, the new FCA director in our town,” Mobley said. “He came today and spoke to the girls before the game and just rejuvenated and encouraged our girls.”

The pep talk worked as the Grangers came out swinging in game one against Haralson County, who they beat 8-0.

The story of this game was Zoe Thompson, who pitched a one-hitter in her season debut. The game was called early because of a lighting delay, but Thompson still got in five innings of work where she fanned two batters.

After a quiet opening inning, the Grangers bats exploded in the second inning as they plated six runs. Carolyne Garcia got the scoring party started with an RBI fly out. With two outs the Grangers just kept on swinging as they scored five runs in the inning with two outs on the board. Abby McGill scored on a passed ball before Tatiana Dudley hit an RBI single. Kimberly Reynolds laid down a picture perfect bunt to drive in the fourth run of the game. Hudson Wood drove in the final two runs of the inning for the Grangers.

The score stayed locked at 6-0 until the Grangers scored an additional two runs in the fifth inning. Kaimarie Turner hit an RBI double to drive in the final two runs of the inning.

Harlee Overton enjoyed the best game offensively for the Grangers as she produced the team’s only multi-hit game. Overton went 2-for-3 with two runs scored. Turner and Woods tied for the team lead in RBIs with two a piece.

The Grangers did not slow down in game two as the team overcame an early deficit to beat Brookstone 6-3.

Brookstone scored two runs in the first inning and another in the second to take a quick 3-0 lead. Instead of getting flustered, starting pitcher Kaylee Foster bunkered down and did not allow a run over the following three innings. Foster ended the game allowing three earned runs on four hits with five strikeouts.

“It looked kind of rough for her at first, but then she started figuring it out,” Mobley said. “Even in the inning where she let in two runs, she was competing hard.”

Foster rallied and kept the Brookstone bats at bay and the Granger offense continued where they left off in game one. The Grangers scored five runs in the bottom of the fifth inning to take the lead. Kaylee Bryant drove in the first run of the game for the Grangers.

LaGrange got an insurance run in the bottom of the fourth inning when Bryant scored on a passed ball.

Dudley had the only multi-hit game for the Grangers in game two. She went 2-for-2 with a run scored. Nation led the team with two RBIs in game two with Bryant and Garcia getting one apiece.

“It wasn’t one person making all the big hits, it was a collective effort,” Mobley said. “Everybody was picking each other up.”

LaGrange will be back in action on Saturday with a game against Northgate at 11 a.m on field 1 at Shuford Fields.