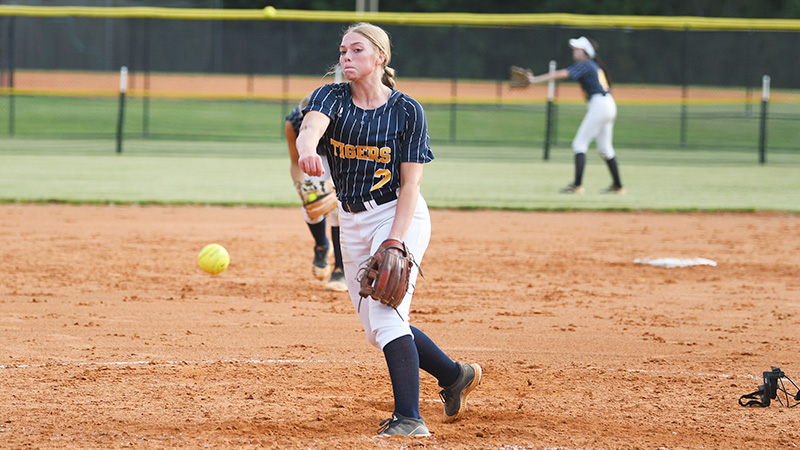 The Troup High softball team earned its first two wins of the season in the Callaway Classic.

The first game saw the Tigers earn a 2-1 win over North Murray in a game that ended after six innings due to a lightning delay. It was a hard fought game even though the Tigers could find little consistency on offense.

North Murray took a 1-0 lead in the second inning, but the Tigers dug deep and battled back for their first victory of the season.

The Tigers tied the game in the bottom of the third inning when Maggie McDonald delivered an RBI double. Troup took the lead in the following inning when Patience Watkins stole home.

The Tigers never looked back as McDonald put in a dominant showing on the mound. She pitched all six innings and only allowed one earned run on four hits with six strikeouts.

“Maggie threw the first game, and she was absolutely amazing,” Simpson said.

McDonald was the star of the show as she also delivered from the plate where she 2-for-3 with an RBI. Ramsey Clark carried a ton of the load offensively as she contributed half of the team’s six hits in the game. Clark went a perfect 3-for-3 with a run scored.

Game two of the doubleheader saw the Tigers beat Bowdon 6-2 in just four innings of play as the game had to be called due to the time.

“Our bats showed up just a little bit in the second game,” Simpson said. “We also took advantage of the other team’s errors.”

The bats came alive early for the Tigers as they scored two runs in the top of the first inning. Sheniyah Philpot hit a double that drove in Clark to score the first run of the game.

Two batters later McDonald delivered again as she slapped a hard ground ball that forced an error. Philpot scored on the play.

Bowdon answered with a run in the bottom of the first to cut the Tigers lead in half. It didn’t last long as the Tigers scored three runs in the following inning.

Haley Kitchens scored the first run of the inning when she scored on an error. Philpot was not content with just one RBI on the game as she drove in another in the second inning. Philpot reached home on a passed ball later in the inning.

Bowdon scored an additional run in the bottom of the second inning, but it had little impact on the final result other than making the score more flattering for Bowdon.

The Tigers added their final run of the night when Kitchens delivered an RBI double in the top of the third.

Camdyn Bassett got the start on the mound in game two and despite racking up 81 pitches in jst four innings of work she kept the Bowdon bats at bay. Bassett only allowed two earned runs on four hits with six strikeouts.

“I honestly feel like if we didn’t have both those girls on the mound today, there’s no telling what would happen,” Simpson said.

Philpot came to life in the second game and was the star of the game as she went 3-for-3 with two runs scored and two RBIs. Kitchens also sparked to life against Bowdon with a 2-for-2, one run scored, and one RBI performance.

“We have to work on hitting,” Simpson said. “Hopefully, our bats show up tomorrow.”

Troup plays another doubleheader on Saturday against McIntosh and Haralson County on field 2 at Shuford Fields. The first game starts at 11 a.m. and the second begins after the conclusion of the first.