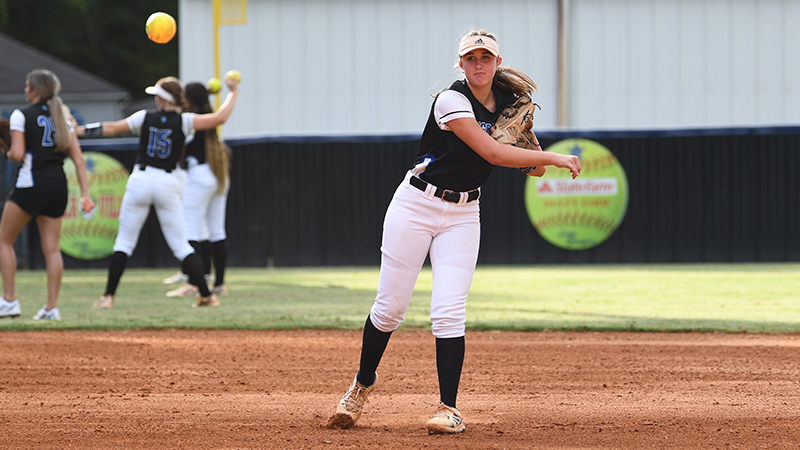 After last Saturday’s game against Northgate was postponed halfway through, the LaGrange softball team took on Northgate on Monday evening. Unfortunately, it was another game cut short by rain and lightning and ended in a no contest with Northgate leading 11-10 when the game was called.

After falling behind 9-0 in the first inning, the Grangers were able to mount a miraculous comeback and even take the lead.

“We are super young so for them to bounce back and show grit and grind and have the determination to fight at this young age is huge,” head coach Craig Mobley said.

The Grangers put on their rally caps in the bottom of the second inning to plate nine runs and tie the game. Tatiana Dudley showed tremendous patience at the plate and walked with the bases loaded to get the scoring started for LaGrange. Kelly Bryant followed this with a RBI single to cut the lead to 9-2. Kimberly Reynolds drove in a run with a single before Hudson Wood walked to make it 9-4. After Northgate got an out, Abby McGill kept the scoring going with a RBI single of her own. Northgate got another out before McKinsey Gaddy slapped a double to center field to clear the bases. Harlee Overton proceeded to tie the game with an RBI single.

Zoe Thompson kept the Northgate bats at bay in the top of the third, which allowed the Grangers to take the lead in the bottom of the same inning.

Wood delivered a RBI double to give the Grangers an improbable lead.

Northgate scored two runs in the top of the fourth to retake the lead before the game was called off.

“Another thing that is huge for our program is when they get it wrong, they admit it, accept it, and move forward from it and say ‘I’ll do better coach and I apologize for my behavior,’” Mobley said.

Kaylee Foster got the start on the mound and combined to pitch 3.1 innings with Thompson.

Wood had two RBIs with Overton, Dudley and McGill getting a RBI apiece.

The Grangers were let down by their defense at times as they committed three errors, which meant that three of the Northgate runs were unearned. Northgate did not commit a single error in the game.

“We made a mistake and then we made another, and it snowballed from there,” Mobley said. “The big thing is we just weren’t communicating.”

This was the second time in three days that the Grangers suffered a no contest versus Northgate. LaGrange was trailing 5-3 on Saturday when the game was called due to inclimate weather.

LaGrange will be back in action on Wednesday as they go on the road to take on Harris County in its first road game of the season.