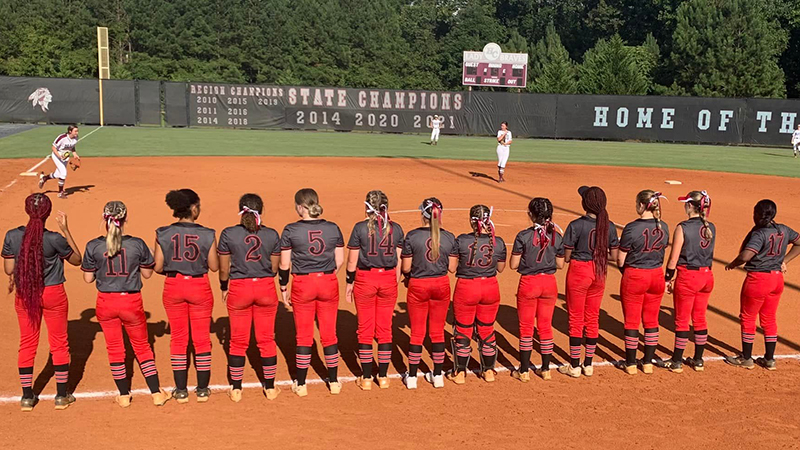 The Callaway softball team lost 11-2 in the first game of the season to two time reigning AA state champions Heard County. It was a tough game full of hard lessons as the Cavaliers put up a fight against their former region rivals.

“I truly would have liked to get a couple of games in during the Callaway Classic before this game,” head coach Josh King said.

This was originally scheduled to be Callaway’s third game of the season, but both of its games last Saturday at the Callaway Classic were called off due to inclimate weather. This meant that the Cavaliers had to open up their season against the premier team in AA softball.

Heard County bombarded Callaway early with two runs in the first inning, four in the second before adding another in the third. The Cavaliers were quickly down 7-0 but did not go down without a fight as they swung back in the top of the fifth.

Emma Bryan delivered a two out, two RBI single to put the Cavaliers on the board.

The Braves ended the game on a grand slam in the fifth inning.

Mya Lawton got the start on the mound and only allowed one hit in 1.2 innings of work as her defense behind her had a rough night.

The Cavaliers committed four errors to just one for the Braves. Two of the Cavaliers errors came in the opening inning, which helped give the Braves some early momentum. The Cavaliers actually out-hit the Braves by a margin of 5-3, but errors and walks kept the Heard County offense rolling.

“We had none walks and four errors,” King said. “It’s very tough to be competitive when you do that. Free bases will kill you.”

Mackenzie Toney, in her first varsity game, came in to relieve Lawton and pitched the final 2.2 innings. She only allowed two hits and put up the only scoreless half inning for the Cavaliers in the bottom of the fourth. Toney sat down the side in the inning.

“She’s a straight up grinder,” King said. “She didn’t have her best stuff tonight, but she was competing hard and went right after them in the fourth inning.”

Bryan was the best offensive weapon for the Cavaliers on the night as she went 2-for-3 with two RBIs as she started her season out with a bang.

“She battled at the plate,” King said. “She put a good swing on both of them and was really well stuck.”

Ava Shufrod went 1-for-2 while Madison Kemp and Mackenzie Rhodes each went 1-for-3 to round out the hitting for Callaway. Jasia Swanson and Kaitlyn Williams each scored a run.

“We put some very good at-bats together,” King said. “I would say three of four balls we hit were on a rope but just went right to a girl.”

The Cavaliers got some valuable experience against one of the top teams in AA.

Callaway drops to 0-1 on the season. The Cavaliers will be back at home on Thursday to take on Bowdon.