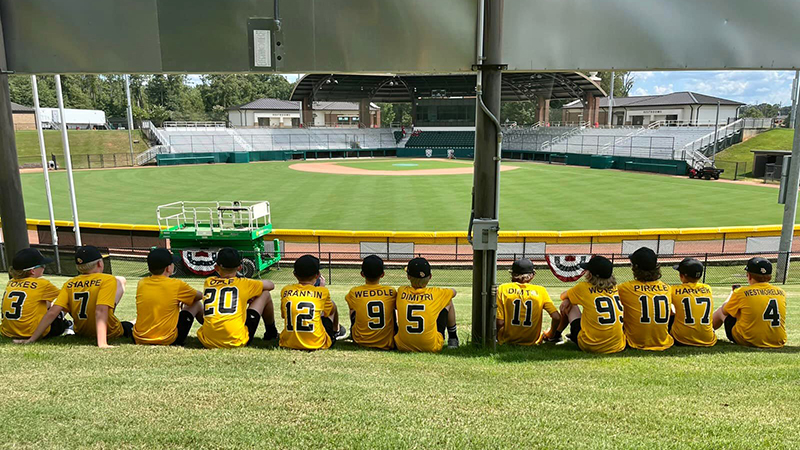 The Harris County 12u All-Star team was treated to a warm return home over the last couple of days after finishing third in the Southeast Regional Little League tournament.

“The whole community has embraced the boys,” coach Wade Pirkle said. “They’ve been getting loved on.”

It has been a long couple of months for the team as they bounced from tournament to tournament with very little downtime inbetween. Over the summer, the team competed in the district, state and regional tournament.

“We spent a week in a hotel in Calhoun. It was fun, but it was long,” Pirkle said. “I was talking to one of the assistant coaches the other day, and I said ‘I think this summer has taken about five years off my life.’”

The summer success culminated in the all-stars getting a chance to represent their state at the Southeast Regional Little League tournament over the last week. The team went 2-2 in the tournament as they competed against seven other teams representing states from the southeast region — Alabama, Florida, North Carolina, South Carolina, Tennessee, Virginia and West Virginia.

The opening game saw the Harris County team dominate West Virginia 12-0 in a game that ended after four innings. JT Pirkle got the start on the mound and only allowed one hit across 3.1 innings he pitched. Will Dimitri was the star offensively in the game as he went 3-for-3 with a walk, three RBIs and two runs scored.

Harris County kept the good times rolling in game two with a tough 2-1 victory over Virginia. Despite not getting the bats rolling, timely defense and pitching got them out of some trouble.

“They played well and we played well, we just scored one more run than they did,” Pirkle said.

Evan Woosley got the start for Harris County and wetn five innings, only allowing one earned run on five hits with seven strikeouts. Harris County could only muster five hits in the game with Cayden Dimitri going 2-for-3 with a run scored to lead the way offensively.

After a pitcher’s duel in game three, Harris County duked it out with Tennessee in a high-scoring affair for a chance to reach the finals. Harris County ultimately lost 9-3 but fought until the bitter end. Each team only had five hits, but it was Tennessee’s offense that came up big in timely situations.

“We had some tough luck,” Pirkle said. “It was one of those days where all the breaks went to one dugout.”

Despite the loss, Will Dimitri had another big offensive game in the tournament as he went 2-for-3 with a walk, a RBI and two runs scored. He reached base on three separate occasions with only one other member of Harris County to reach base more than once in the game (Riley Harper).

“We threatened a couple of times, but we just could not get that hit to close the gap,” Pirkle said

“They loved it,” Pirkle said. “The coolest thing was playing the game, and then going back to the hotel and watching it on TV. We got a kick out of that. We did it just about every night.”

It was not just a lot of eyes on them through a blue screen, the Harris County faithful showed up in numbers to Warner Robins.

“They are not going to see an atmosphere like that for a long time, it’s the nature of baseball,” Pirkle said. “Obviously we want to win, but I told them to soak it all in because not many people get the opportunity like that.”

All the players from the team – Will Dimitri, Brody Johnson, JT Pirkle, Fisher Ogle, Cayden Dimitri, Evan Woosley, Tyson Sharpe, Riley Harper, Tucker Weddle, Will Brannin, Carter Westmoreland, and Levi Stokes – will be aging out of Little League. For some, this might be their last game playing baseball, but for others they will continue playing in middle school.

Wade Pirkle has been involved with his son’s little league team for years now and knows it was bittersweet to coach his last Little League game as well as watch his son suit up for the final time at this level.

“I don’t even have words,” Pirkle said. “It’s just one of those things.”