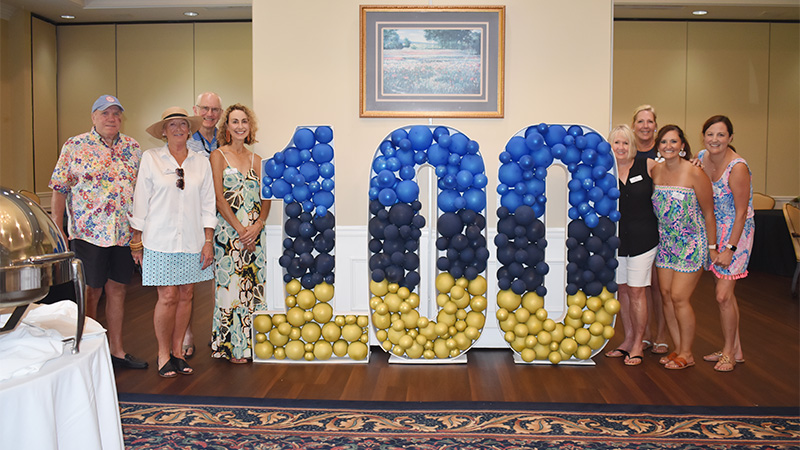 According to the country club’s website, since its founding in 1922, the club has been an integral part of LaGrange’s community, offering residents a place for entertainment, business and sport.

“I’ve been a member 42 years, so it been incredible to see this place still standing in its glory,” Jan Wieland, Centennial Committee member said.

Friday kicked off the festivities Great Gatsby style with a party. The theme of the party was family, which included live music and activities for the children of club members to participate in.

“If anything was beyond fanaticism and to have at it here at Highland Country Club through the trials and tribulations of everything that everybody’s been through over those years and here most recently, it’s an absolute privilege for us in our members to thrive,” said Scott Gordy, a proud member of the club.

Toward the middle of the party the Highland County Club committee unveiled a centennial flag officially signaling the start of 100th year celebration of the club.

According to Deal, all of the events held next week will lead up to a big gala that is going to be held Friday, Aug. 19.

The events for the week are as follows:

On Saturday, the club will host a golf tournament.

On Tuesday the 16th, there will be a ladies game morning and followed by taco and bingo night for all members.

Wednesday will be a guys night centered around golf, the Braves, and barbecue.

The last event will be the Centennial Gala on Friday that will feature live music and lots of very special events for members, Deal said.

“I think it feels great to have this club last for 100 years. My dad was a member, so I remember being here as a little girl,” said Tracy Woods, a long-time member of the club.

According to the Troup County Archives, the Highland Country Club was designed by Neel Reid, the same architect who designed the famous Callaway home, Hills and Dales.

Among the many historic aspects of the club is the golf course, famously designed by Donald Ross. Ross was a Scottish immigrant that came to America in 1899, like most immigrants at the time seeking an opportunity for their chance at the “American Dream.” During his lifetime, Ross designed over 400 golf courses.

Historically, many celebrities and public figures frequented the club and were often seen either golfing or hanging out. Some figures often seen were Danny Thomas (founder of Saint Jude Hospital), Alfred and Nasor Mansour (partial owners of Mansour’s Department Store), and Judge Lewis R. “Pete” Morgan (former judge of the United States Board of Appeals).