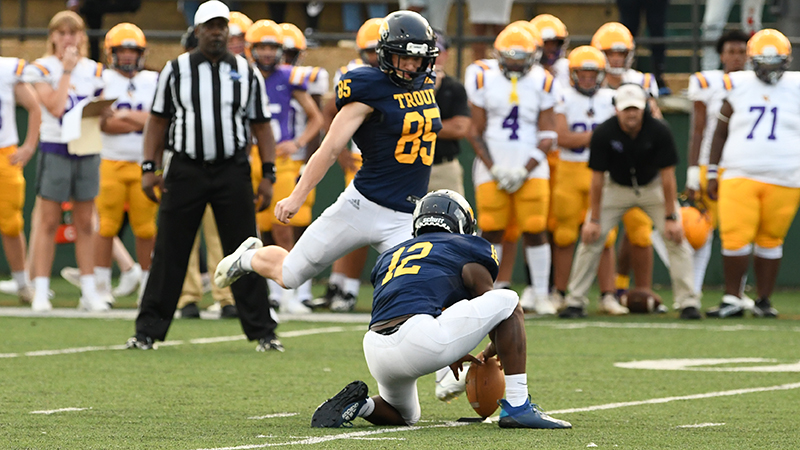 Chris Moore, a senior at Troup, is taking on a new challenge this season. Moore is about to see how well his skills transition from the soccer pitch to the gridiron. He is one of the Tigers best soccer players and is now looking to make just as big of an impression with football.

“I kicked a little in middle school, but I decided to stick with soccer because I was still pretty small back then and never saw myself playing in high school.”

While middle-school Moore was “small,” the high school version is not. Standing at roughly 6’2, Moore has the build of a guy that you would typically see playing at linebacker or tight end. While his friends have been clamoring for him to come out and play in years past, Moore did not want to jeopardize his future with soccer, his favorite sport.

“I knew they didn’t have a kicker and coach (Mike) Healy had been wanting me to come out for a while,” Moore said. “I thought I might be good at it.”

Troup head coach Tanner Glisson knew there was a big need in the special teams department and scoured the Tigers soccer team to find the right candidate.

“We did actually recruit him,” Glisson said. “We saw him in the gym and on the soccer field, and we begged him to come play.”

Three years of high school came and went with Moore never stepping on the football field as a player. Now, he is the team’s most important special teams player despite it being his first year with the Tigers. Moore will handle kickoff duties, punts, field goals and PATs for Troup.

“I’m more comfortable with place kicking, field goals, and PATs,” Moore said. “Punting is probably the newest thing to me.”

Moore has the power but is still working on accuracy and the plethora of different kinds of punts. While punting is still taking some adjustments from Moore, he unleashed a booming punt in the Tigers scrimmage against Villa Rica last week that helped boost his confidence.

Last week’s scrimmage was the first true game action that Moore has faced and will be so until he takes the field on Aug. 19 for the Tigers opening game of the season against Harris County.

“I was somewhat used to [the pressure], but it was a whole new experience for me being in a real game,” Moore said.

The scrimmage against Villa Rica was at home in Callaway Stadium where Moore had a ton of loyal Troup supporters cheering him on. Next week’s game against Harris County will be a new sort of “pressure” as he has to kick and punt in front of hundreds of rabid opposing fans jeering him and hoping he makes a mistake.

Moore still has some work to do, but he has been making progress since the beginning of the summer. Strength and accuracy have been greatly improved.

“When I first started out, I couldn’t punt at all,” Moore said with a laugh. “One of my goals over the summer was to kick a 50-yard field goal, and I got to that in practice last week.”

Moore’s soccer background certainly gives him a platform to build off of. While the kicking techniques between sports are similar, there are still some subtle differences.

Moore will be suiting up in the No. 85 jersey that he plucked off the rack. He is not sentimental about the number he wears on his back — he wants to be remembered for what he does on the field.