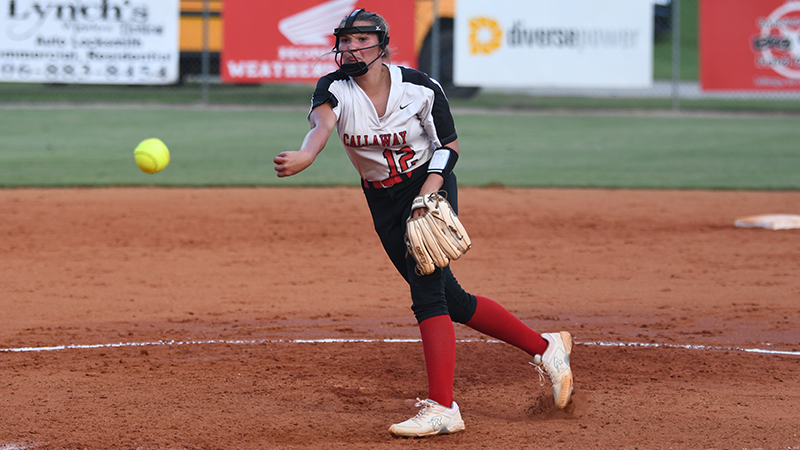 Callaway softball earned its first victory of the season in a hard fought 1-0 win over Temple on Monday evening. After dropping their first four games of the season, this win came at the perfect time as the Cavaliers are on the verge of starting region play.

“It feels great, you can see the smiles on all the girl’s faces,” Callaway head coach Josh King said. “There is some tension through practice when you’re going through a hard patch.”

Callaway got in done on the night in large part because of Kaitlyn Williams on the mound and the defense behind her. Williams pitched all seven innings and only allowed three hits on three strikeouts. Williams consistently got herself and the Cavaliers as a whole out of trouble, including twice getting key outs with a Temple runner on third base. Williams also chipped in on offense with a 1-for-3 performance.

“I can’t speak highly enough of the defense and the pitching,” King said. “Kaitlyn came in and filled up the strike zone and let our defense make plays for her.”

The Tigers had runners on first and second with one out in the seventh, but Williams and her defense were able to get the job done and secure the win.

The Cavaliers generated quite a bit of offense in the game but could not always capitalize in key situations. Callaway left nine runners stranded in the game.

Karlie Walker drove in the sole run of the game in the bottom of the third inning when she grounded out to drive Mya Lawton home. Walker was arguably the best offensive player in the game as she went 2-for-3 in the game. Lawton went 1-for-2 with a walk and a run scored.

Savannah Rice and Kylah Harris each went 1-for-3 in the game for the Cavaliers.

Callaway improves to 1-4 on the season. The Cavaliers will take on Trinity Christian on Tuesday.

“I am very happy with the performance,” King said. “Anytime we get a win I’m going to be super happy.”