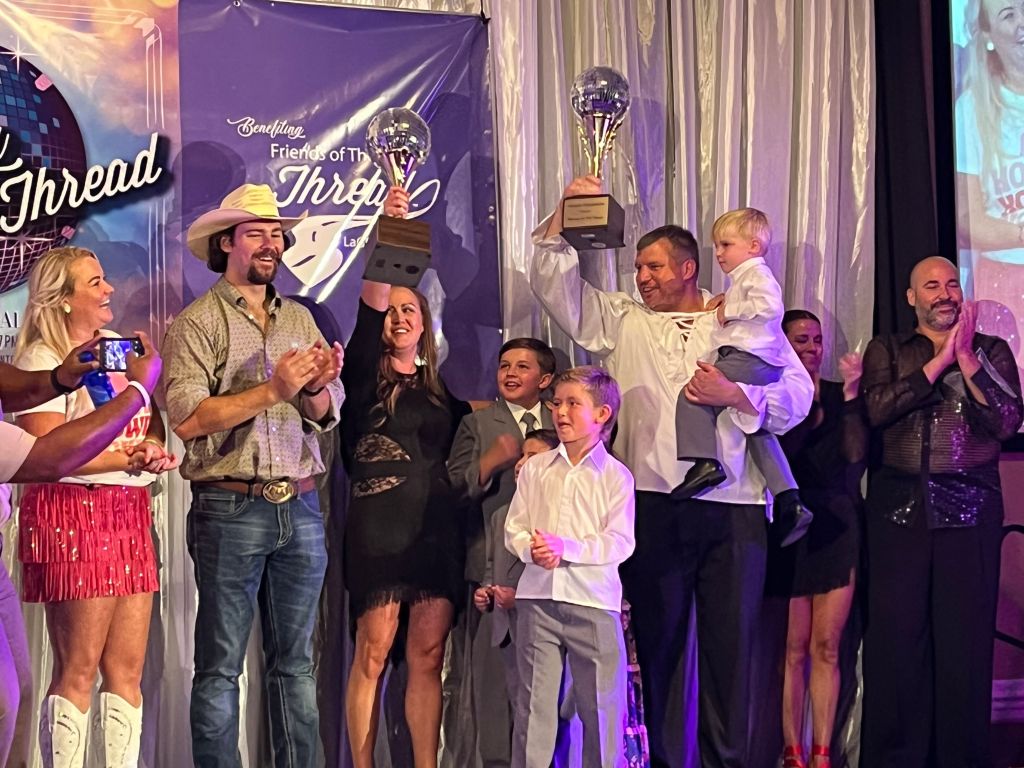 EDITOR’S NOTE: The totals brought in by the top fundraising couples have been corrected.

The Friends of The Thread hosted its Fourth Annual Dancing for The Thread fundraiser on Saturday night, two-stepping its way across their goal to raise $100,000 to support LaGrange’s multi-use trail.

The annual dance competition raised $121,293.17 toward extending and beautifying The Thread. Before the dancing even started, the fundraiser had met its goal through monetary donations for this year’s competitors.

Half of each dance couple’s score was tabulated by the amount of money they raised during and prior to the competition. Throughout the night, the scores shifted as competitors received additional votes in the form of donations from those attending the event and watching at home. One dollar donated amounted to one vote for the couple.

The other half of the scores were given by a panel of three judges with years of competitive dance experience. Returning judge Patty Taylor, owner of Academy Dance Center, was joined by Columbus State Director of Dance Amy Mutarelli, who currently serves as Line Instructor for the Auburn Tiger Marching Band, and Lindsey Tassoni, who teaches dance and engineering for Downtown Elementary Magnet Academy in Columbus.

The competitors were given scores from 1 to 10 based on their creativity, dance technique, costumes and stage presence.

After all the dances were judged and votes were tallied, Ginger and JJ Wahl were crowned this year’s winners. The Wahls raised $31,677, but it was their dance skills that put them over the top. Maggie McDonald and Luis Hernandez also raised a significant portion for The Thread with $28,585 brought in.

The other competing couples were no slouches either. Competitors Valerie and Derek Kite, Brandon and Bell Solomon, Doug and Caroline Kersey, Molly McKeen and Hutch Blair, and Jerika and Quay Boddie raised over $10,000 per couple.

The Friends of The Thread was formed in 2016 before ground was even broken on The Thread. The group’s goal is to work with the City of LaGrange to help create and extend the multi-use trail throughout the city.

“We are just a group of ordinary citizens dedicated to helping The Thread,” said Friends of The Thread President Dr. Charles Metcalf.

Initial sections of The Thread were primarily paid for using Special Purpose Local Option Sales Taxes (SPLOST), but its upkeep and expansion are supported through Friends of The Thread fundraising.

LaGrange Mayor Jim Thornton emceed the competition and thanked everyone for their support of The Thread.

“You make [The Thread] happen, not just with events like tonight,” said Thornton, “but when you go to the polls to support SPLOST referendums.”

Thornton noted that The Thread is already over 10 miles long and well on its way to the planned 29-mile mark.