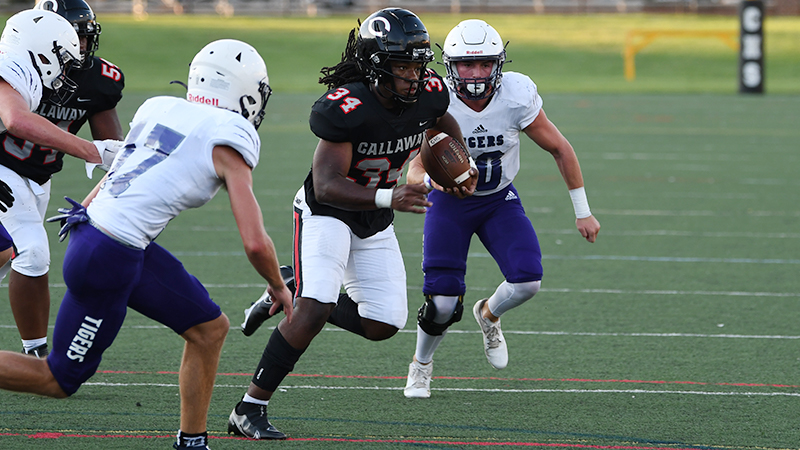 Callaway is on the verge of facing Opelika to kick off its season once again. The burgeoning rivalry kicked off in 2018 before taking a year off in 2020. Callaway is 2-1 in those three matchups, including a 30-21 victory last season.

“Last year’s game came down to a field goal at the end and the year before was a 10-7 game,” Callaway head coach Pete Wiggins said. “I think that it will be a very physical contest Friday night.”

While Callaway is an AA team, Opelika plays in the AAAAAAA classification in the state of Alabama, which is the largest.

“They have really good depth that will be to their benefit,” Wiggins said.

“Opelika is a well coached team and will be tough to beat,” Wiggins said.

What the Cavaliers lack in size, they make up for in pedigree. The Cavaliers are ranked inside the top five of most AA preseason polls and are T5 in the Georgia High School Daily composite poll. Callaway’s resume speaks for itself as the team has won at least one playoff game every season for the last decade and captured its first state title in 2020. The Cavaliers were back among the elite in 2021 as they made it to the semifinals of the state playoffs.

“The guys are really excited to get back out there,” Wiggins said. “This is what you work hard for all year, and it should be a good atmosphere.”

Callaway earned a 21-3 victory over Darlington last week in a scrimmage to prepare for the season. The Callaway pass game could not get a whole lot going, but the run game was able to generate some momentum. Tyren Buggs ran hard and scored the Cavalier first and only touchdown in the first half. He also hit a monster 30+ yard run on the drive to set up the Cavaliers with a goal to go situation. Brandon Herndon, a freshman, hit a big 35-yard run in the fourth quarter to get the Cavaliers into the red zone before punching it in himself for six to extend the Cavaliers lead to 21-3 after the PAT. Quay Whitfield got the start at running back and proved tough to tackle as he regularly ran through the first defender in the game.

The run game was good, but it was the defense that stole the show with Elijah Gunn and Davion Tucker each had pivotal sacks. Sam Williams, a senior committed to Wake Forest, also put in a dominant showing on the defensive line. Despite the defensive line dominating the trenches, it was Exavious Reed with a monster pick-six in the fourth quarter to make it 14-3 and put some breathing room between the Cavaliers and Darlington.

“I think us and Darlington benefited from that,” Wiggins said. “We came away from the game seeing things we could do better.”