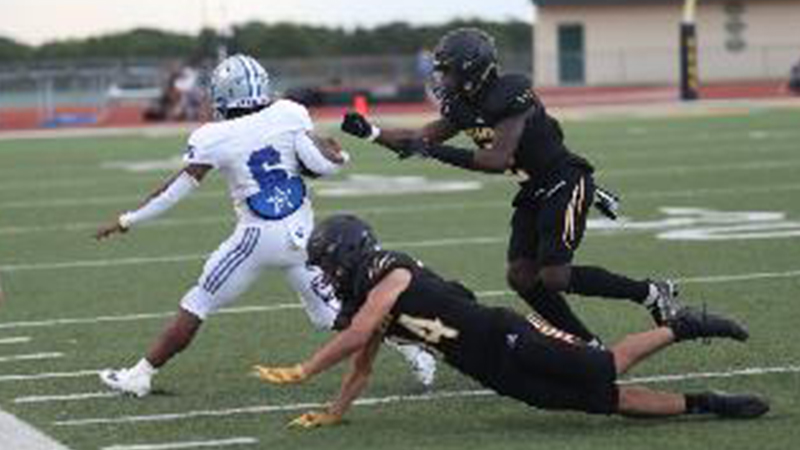 LaGrange football is gearing up to start its season with a road trip to Smiths Station on Thursday.

LaGrange is coming into the game riding some momentum after beating the brakes off Harris County in a scrimmage last week. The Grangers ended up getting a 42-7 victory over the Tigers.

“They have a lot of good football players so the way we went out there and competed at a high level gives us some confidence going into the first game,” head coach Matt Napier said. “We also understand it’s just a scrimmage though.”

Wide receiver Magic Johnson went crazy as he was in tune with Brown all night. Johnson put up five catches for 161 yards and three touchdowns in his first season as the no.1 receiver for the Grangers.

Jardon Stringer and Jaylon Jordan showed big play potential with one catch for 62 yards and a touchdowns and one catch for a 53 yard touchdown respectively. Backup quarterback Tremez Sellers flashed his potential as well with a 4-for-4 138 yard, two touchdown performance.

The running game was not quite as efficient as the passing game but still chugged a long at a good clip. The team combined for 28 rushs and 107 rushing yards with Malachi Fannin-Render leading the way with 11 rushers for 52 yards.

“I think we need to run the ball a little bit better than we did down there,” Napier said. “We have to execute in the run game better.”

The run game was not the only aspect of last week’s scrimmage that Napier wants to clean up. The Grangers committed 13 penalties against Harris County.

“We had a couple of untimely holding calls that killed a few drives,” Napier said. “We have to be smart and understand our leverage.”

Scrimmages are over as the regular season is on the horizon. LaGrange’s first opponent – Smiths Station – plays in the highest classification of Alabama high school football (AAAAAAA). After going 6-4 in 2018, the Panthers have not had a season above .500.  Smiths Station is just 7-22 over the last three seasons including a 2-8 record last year. The Panthers record is a bit deceptive as they regularly play some of the top teams in the state of Alabama.

“They are really well coached and play some extremely tough competition,” Napier said. “I think our guys are excited to cross the border and have a border war with this team.”

Napier is entering his third season in charge and has returned the LaGrange program to relevance after a wayward period for the Grangers. LaGrange is the second winningest high school program in the state, but in the four years before Napier arrived the team was a combined 6-34. The Grangers are 17-7 in two seasons under Napier. The Grangers have reached the second round of the playoffs in both seasons. LaGrange beat Baldwin 19-0 in the first round before dropping the round two game against Marist 48-7 (Marist moved up to AAAAAA in the offseason).