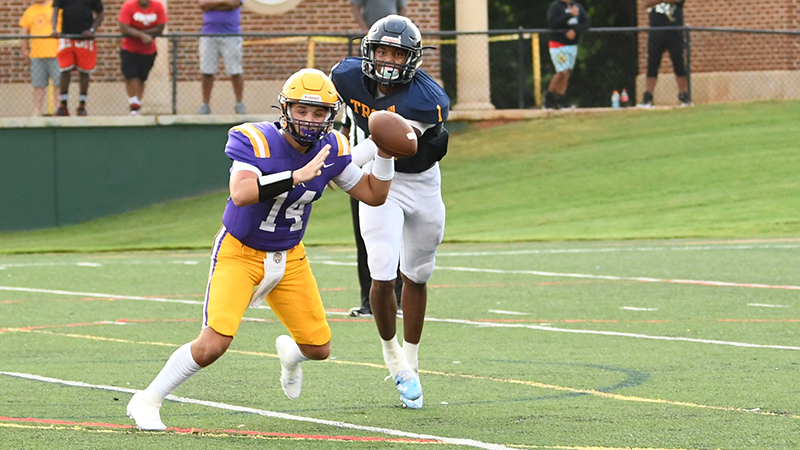 Troup County is raring to go and compete against a tough Harris County team on Friday to open the season.

“We are fired up and ready to go,” head coach Tanner Glisson said. “It get’s a to a point where [the offseason] gets a bit boring and a bit stale and the guys are ready to play somebody other than against themselves.”

The Troup-Harris County game is beginning to turn into a true rivalry. This will be the fourth straight year that these two teams meet. Troup has proved victorious in three of those four matchups with the only loss coming in 2020 by a score of 28-14. Troup won the last meeting 28-21 to open the 2021 season.

“We are kind of unique because we border Harris County, and we have two rivals here in Callaway and LaGrange,” Glisson said. “Both teams are usually pretty good.”

Harris County is experiencing a bit of turnover this season as new head coach Tommy Watson will be leading the charge. Watson was previously in charge of 7A Lambert High School for two seasons where he led them to a 12-9 record over two seasons with a first round playoff berth in 2021.

The Harris County Tigers went 7-5 last season en route to a second round playoff exit. Harris County took it to Dutchtown 56-35 in the first round before falling to Villa Rica 34-21 in the second round. Harris County competes in the AAAAA classification and will be entering into a new region just like Troup is. Fortunately for Harris County, three of its six region opponents – Northside, McIntosh and Northside – will be in the new region with Harris County. All three of those teams finished 1-5 or worse in last season’s region and occupied the bottom three spots.

Troup is also entering a new region but will only have one familiar region foe – LaGrange. Right now the team is focused on the brutal non-region schedule that kicks off their 2022 campaign.

“The biggest thing is to get some experience and stay healthy as long as we can,” Glisson said. “To go through the gauntlet we have across ten games is going to be tough, and it’s going to challenge our depth.”

Troup will be returning Taeo Todd as the starting quarterback and with the strides he has taken in the offseason, the team hopes the offense will be even better despite losing their top wide receiver from last season – Dwartney “Buddy” Wortham. Troup’s defense will be anchored by Qua Birdsong who is just beginning his junior season and is already a four star recruit. Birdsong is the type of dominant pass rusher that can single handedly blow up offensive possessions.

Troup, who still competes in the AAAA classification, went 8-3 last year. Troup lost to Spalding in a tight affair in the opening round of the playoffs 10-3. Troup is ranked ninth in AAAA, according to Georgia High School Football Daily preseason composite rankings.

“We start off 0-0 and the anticipation of a new season is really great,” Glisson said. “You work year round for Friday nights.”