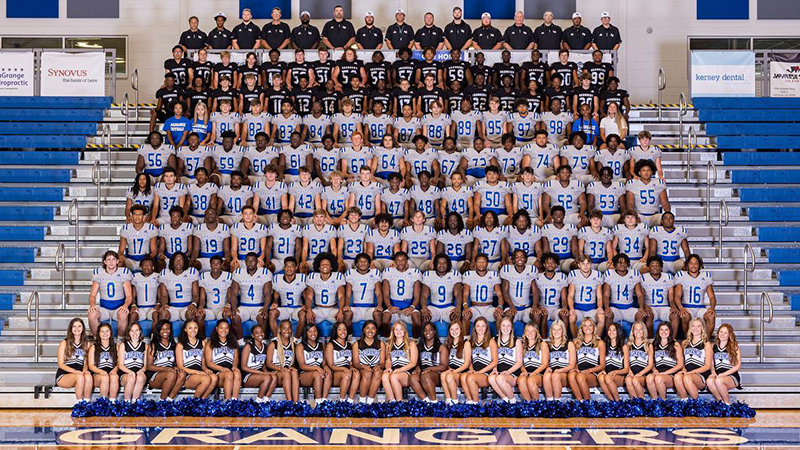 EDITOR’S NOTE: This article originally published in our 2022 Pigskin magazine

After a long spell of ineptitude, the Grangers football team has returned to form under head coach Matt Napier. After taking over a program that had won just four games in three years, Napier won eight games and took the Grangers back to the playoffs in his first season (2020). The Grangers had not been to the playoffs since 2014 and had not won a playoff game since 2012.

Like a phoenix from the ashes, the Grangers are set to rise again. After two straight round of 16 appearances in the AAAA playoffs, LaGrange is poised to be a powerhouse in football once again.

“We couldn’t have camp during my first year,” Napier said. “It was tough, but I think we’ve definitely learned from it.”

Continuity is key for the Grangers this season as returning players will now be more comfortable in Napier’s system.

“Our kids are now familiar with the system that we’ve been running for three years in a row now,” Napier said. “I think that’s going to have a big impact.”

While the system offers some continuity, the new region that LaGrange finds itself in looks very different from the one in previous years. The Grangers will have all new region opponents outside of crosstown rival Troup. LaGrange enters into an extremely tough region with six of their seven region opponents making the playoffs in their respective classifications last season.

“We’re presented with some big challenges in our region,” Napier said. “There are some talented football teams that are very well coached in our region this year.”

It is going to be a challenge for the Grangers this season, but the team is looking forward to these big games and big opportunities.

“I think our guys are really looking forward to the challenge,” Napier said. “I’m just glad that it’s in year three and not year one.”

Jaylan Brown is going to get the nod as the starting quarterback after being moved around last season. Brown started at quarterback during his sophomore season before relinquishing the position to Tae Snead last year.

“Tae was a dynamic player and an elite player that really thrived in our season,” head coach Matt Napier said. “We are fortunate enough to have a young man (Brown) that has played an entire season at quarterback.”

The Grangers were able to win eight games with Brown at the helm in 2020 as he threw for over 1,700 yards and ran for nearly 800 yards as a sophomore. Brown is a true dual threat quarterback, who has taken some steps forward in his progression since switching back to quarterback.

“We have high expectations for him, he’s been really impressive in the padded camps we’ve had so far,” Chambers said. “We averaged 35 points a game when he started in 2020.”

While Snead brought a bit more speed to the quarterback position last season, Brown will bring the power and is very capable of beating teams with his arm or with his legs.

Despite losing Asa Leath to graduation in May, the Grangers are still extremely deep at the running back position. However, the Grangers will be returning AJ Tucker, who was the team’s leading rusher last season. Tucker is a power back at over 200 pounds but brings some speed to the position as well with his 4.5 time in the 40 yard dash.

“We’re really deep at the position,” Napier said. “We’re extremely excited to have AJ back after he rushed for over 1,000 yards last season.”

Malachi Render-Fannin and Jonathan Keys, both sophomores, figure to be an even bigger part of the rotation this year after getting some varsity reps last season as freshmen. Render-Fannin brings a lot of speed to the position while Keys is a balance between the other two running backs.

“Malachi has had an absolutely tremendous offseason,” Napier said. “It will be a true three headed monster in the backfield.”

All three backs will get some playing time as different situations will force the Grangers coaching staff to rely on one back over the others.

“Coach (Reed) Murphy, who is our offensive coordinator and running backs coach, will get a feel for them and a feel for how the game is going,” Napier said.

The Grangers are having to do some retooling at the wide receiver position after losing their top two receivers Kobe Jones and Tristan Smith to graduation. Jones was a do-it-all type player while Smith’s 6’4 size gave him a distinct advantage over most defenders he faced.

Senior Magic Johnson’s role will expand this season after playing primarily in the slot last year.

“He’s a three-year starter who will move outside and play more of the role that Kobe Jones played last year,” Napier said. “He’s an explosive player who can do multiple things including returning kicks.”

It will be a committee approach for the other two starting receiver spots with three contenders vying for the positions. Jaylon Jordan, Tayshon Lemon and Steven Hill are the next three players on the depth chart. Jordan, a senior, stands at 6’5 and will offer a more direct replacement for Smith with his large body and ability to reel in contested catches.

“All three of those guys have made a ton of plays during the summer camps,” Napier said.

“Both guys can put their hand in the dirt and go downhill and block, but they can also line up in the slot and beat man coverage,” Napier said.

Continuity is the name of the game for the Granger’s offensive line as they will have four returning starters. KT Owens, Jycel Mosley, Jayden White and Keliijah Parks are all returning to the fold after starting games last season for the Grangers.

White, a senior, missed a good portion of last season with an injury, but is one of the Grangers most accomplished players with multiple Division I offers on the table.

The Grangers will be looking to fill the void at arguably the most important position on the offensive line, left tackle. Last season’s starting left tackle Qua Thornton left LaGrange to play football at Tuskegee University.

“We’ve got big shoes to fill there,” Napier said. “Right now, we have two guys battling it out for the position, Ivan Gomez and Jaden Ligons.”

Gomez started a game last season as a freshman, but Ligons has the more prototypical build for a left tackle at 6’5, 315 lbs.

Napier had to plug and play a multitude of different offensive lineman during his first season as coach (2020) before getting some stability last season. This season will be the first time he has returned so many starters on the offensive line, which is a huge boon for the team.

“There’s a chemistry with those guys and it feels like a true unit,” Napier said.

The trenches on the defensive side of the ball are projected to be one of the strengths of the Grangers football team this year.

“We have been really pleased with the depth we’ve been able to build for our defensive front,” Napier said. “We have nine guys on our defensive line that we would consider playing.”

“Ni and Shurmack bring a little bit more size, but Partin and Townson have the experience and quickness,” Napier said.

Bryston Huzzie, Javari Moss, Christian Ector, Yashawn Butler and Parker Shattuck will battle it out for the two defensive end spots. Ector is the team’s most natural pass rusher.

Isaiah Jordan was one of the leaders of the defense last season despite missing the entirety of his senior year last season. JD McCutcheon will be a three-year starter as he has one of the linebacker spots nailed down going into his junior season.

“He started a handful of games as a freshman before coming on and starting every game for us last season,” Napier said.

This year’s starting quarterback, Jaylan Brown, started at linebacker alongside McCutcheon last season but will be transitioning to quarterback full-time this year. This leaves a hole opposite McCutcheon that looks to be filled by junior JT Burks.

One of the team’s primary running backs, Jonathan Keys, will see time at linebacker as well. The Grangers primarily play with two linebackers, but Keys will see time spelling the other two guys when they need a rest.

Jeffrey Sims and Braden Karcher were the team’s starting outside linebackers last season and will resume their roles this year.

The Grangers will be replacing their top two corners with Kobe Jones and Martavious Martin graduating in the spring.

“They were two really good players so finding a replacement for them is extremely important,” Napier said.

Two guys have stepped up for the Grangers in the offseason, senior Marcus Jones and sophomore Denorayon Reid. Jones got a lot of experience on varsity last season as a safety while Reid spent time as a starting cornerback for the JV squad. Reid could also see time as a punt returner as well.

“They are going to be the team’s starting corners, and we’ve been really pleased with their progress, and we’re extremely excited about the way they are playing,” Napier said.

Junior Nazir Garrett will provide cover and depth at the cornerback position.

JJ Johnson started at safety last season and will keep his spot this season. Jeffrey Sims will be used as a safety as well as a linebacker as the Grangers move him in and around the box.

“He’s that guy that’s an in-betweener,” Napier said. “He’s going to be a three year starter this year.”

“He actually hit a really clutch field goal for us in the first half of our first round playoff game,” Napier said.