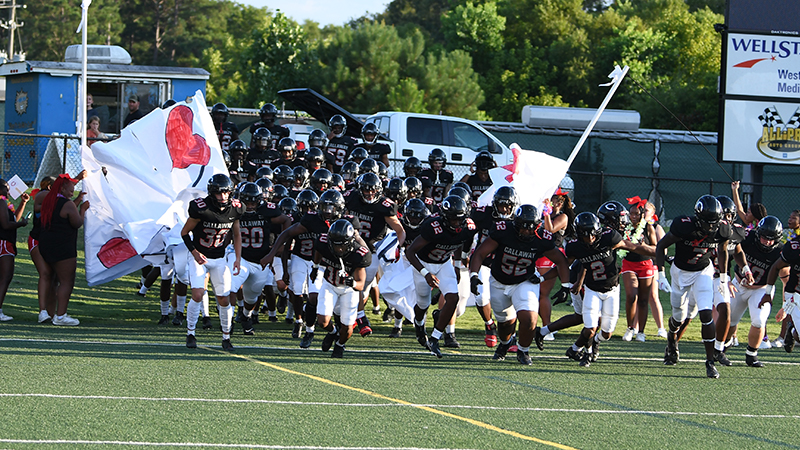 Callaway High School football has been one of the top teams in AA over the last few seasons  and 2022 looks to be no different. The team claimed their first state title in 2020 before making an appearance in the semifinals last season. Under head coach Pete Wiggins the Cavaliers feel like a lock to make a deep playoff run every year. They have made it out of the first round of the playoffs every year since falling in the first round in 2011.

“We can’t focus on what we’ve done in the past. It’s a new season,” Wiggins said.

These strong words are why the Cavaliers never rest on their laurels and are able to contend for titles. Some teams win big and come back the next season with an air of arrogance around them — not the Cavaliers. Wiggins makes sure that his players never get complacent as there always seems to be a quality backup at every position for Callaway.

With so many quality players, it can be difficult to figure out what position players will succeed at.

“Right now, it is about finding out how we can put these guys in a position to succeed,” Wiggins said.

Callaway will start the season with a brutal four game stretch against quality teams from outside their region.

“Our first four games are Opelika, Cedartown, Troup County and Heard County,” Wiggins said. “All four of those teams have great players and are extremely well-coached.”

After the brutal opening, the Cavaliers will start up region play. Callaway is entering a new region this season and may find their quest for a playoff spot a bit more difficult. The new region includes more teams than their previous one, but the amount of playoff spots available for the region remains the same (four).

“In our new region, there’s a ton of unfamiliar opponents,” Wiggins said. “We have never played Redan, Columbia, Towers, Eagles Landing, McNair and Landmark Christisn, but it’s an exciting opportunity that we have to go up against these good opponents.”

After two straight region titles, the Cavaliers finished second in the region to an extremely tough Haralson County team last season. While Callaway will not have to contend with the likes of Haralson County this season, they will have to prepare for Eagle’s Landing Christian Academy, who figure to be the Cavaliers toughest obstacle in their path to a region title. Eagle’s Landing made it to the semifinals of the A private classification last season where they fell in double overtime to just miss out on a chance to play for a state championship.

While those outside the locker room are dreaming of capturing their second state title in the last three years, the coaches and players are focused on their day to day work.

DeShun Coleman will be the starting quarterback once again after impressing as a sophomore last season. Coleman is a dual threat quarterback who can beat defenses with his arm or his legs.

“I was really proud of his sophomore season where he followed in the footsteps of his brother Demetrius (Coleman) who was a three year starter for us at Callaway,” Wiggins said.

After living in the shadow of his brother last season, Coleman is making the quarterback position his own. He has worked to get stronger in the offseason as well as becoming a leader for the team.

After losing Cartavious “Tank” Bigsby in 2019 and Charlie Dixon in 2020, some teams would expect to take a step back at the position, but the Cavaliers have kept producing quality running backs and this year is no different. Amarion Truitt and Qua Whitfield will be returning this season after providing a solid 1-2 punch last year.

“Jordan King is also a name I think people will see a lot of,” Wiggins said.

King, a junior, was moved around the offense last season as a sophomore and had to battle back from a significant injury earlier in his high school career.

“All three of them have good size and run well,” Wiggins said. “I think there will be great opportunities for all of them to find success in our offense.”

This position will see quite a bit of turnover for the Cavaliers this season. The team lost Carlos Billinslea, Andrew Locke and Cam Smith to graduation. All three players received ample playing time at receiver last season, and each will be difficult to replace.

Korey Jackson, Cam Tucker and Treyonn Tucker will likely see the majority of the snaps at wide receiver this season.

“They have spent a ton of time on the practice field trying to improve their skills and make themselves better,” Wiggins said. “They are dedicated, and they have a great work ethic.”

The five starters along the offensive line are still in flux as Wiggins figures out the best unit.

Joey McConnell, a senior, has put in work during the offseason and could see himself start at center.

“He’s been a great team player,” Wiggins said. “He’s always been there when we needed him.”

“They have both played a lot of football,” Wiggins said. “I think those two guys have a really high work ethic.”

Tyrone Fitten, Elijah Gunn, Hatavious Leslie and Greg Gates will be duking it out for the two open tackle positions as well as providing depth elsewhere on the offensive line.

“I think we have a really good group, and I’m excited to see what they can do on Friday nights,” Wiggins said.

Sam Williams, a Wake Forest commit, will lead the troops along the defensive line. Standing at 6’4 and weighing in at 280 pounds, Williams is an intimidating force for any offensive line to deal with.

“He’s an outstanding player for us,” Wiggins said.

Elijah Gunn will see a ton of reps at defensive tackle position and is in line to be one of the starters. Gunn was in the rotation during 2020 before claiming a starting spot in 2021.

Alan Shuman and Dylan Stephens are penciled in as the other two starters on the defensive line.

“All four guys have played a lot of ball for us and will provide a ton of experience for us,” Wiggins said.

Jimmy Harmon, a senior, and junior Fred Tigner will offer the Cavaliers some depth along the defensive line.

The linebacker position will see multiple players rotate in and out. Amarion Truitt, one of the team’s best running backs, will play some linebacker for the team as well as he plays both sides of the ball. Deontaeus Brooks, a senior, will also get some playing time at one of the linebacker spots.

“I think Brooks and Truitt are leaders,” Wiggins said. “Truitt has a lot of experience and has played a lot of reps for us whether it be at tailback or inside linebacker.”

Jordan King will also see some reps at linebacker.

“He’s been getting faster and a lot stronger in the offseason,” Wiggins said.

Abreon Ford and Trey Freeman, both juniors, could receive some time at linebacker.

Carmelo Burton started at one of the cornerback positions last season and will likely get the nod there once again as a senior this year. Junior Korey Jackson is penciled in as the starter opposite of Burton but could see some time at safety.

Cam Tucker is another guy like Jackson that is super versatile. Tucker could play some at safety or cornerback.

Davion Johnson, a senior, will see ample playing time in the secondary and could earn a starting nod at one of the safety spots. Sophomore Kavious Leonard has impressed in the offseason and has worked himself into the equation in the secondary.

“We feel confident in the back end of our defense regardless of who starts,” Wiggins said.

Last season’s starting kicker, Blake Eubanks, has graduated, but the Cavaliers have worked on Greyson Batchelor taking over as the starting kicker, and he will finally get his chance to start his junior season.

“He’s been working really hard, especially in the weight room,” Wiggins said. “He will come up here alone and work many hours by himself to perfect his craft.”

Ryan Seagle, a sophomore, will be the team’s punter this season.

“He’s a lot like Greyson where he will come up eher and work on his own,” Wiggins said.

Senior Dylan Nation will be the Cavalier’s long snapper once again this season.

“He has driven around to various camps this summer to work on his long snapping,” Wiggins said. “He’s really talented and a big part of us winning games with our kicking game.”