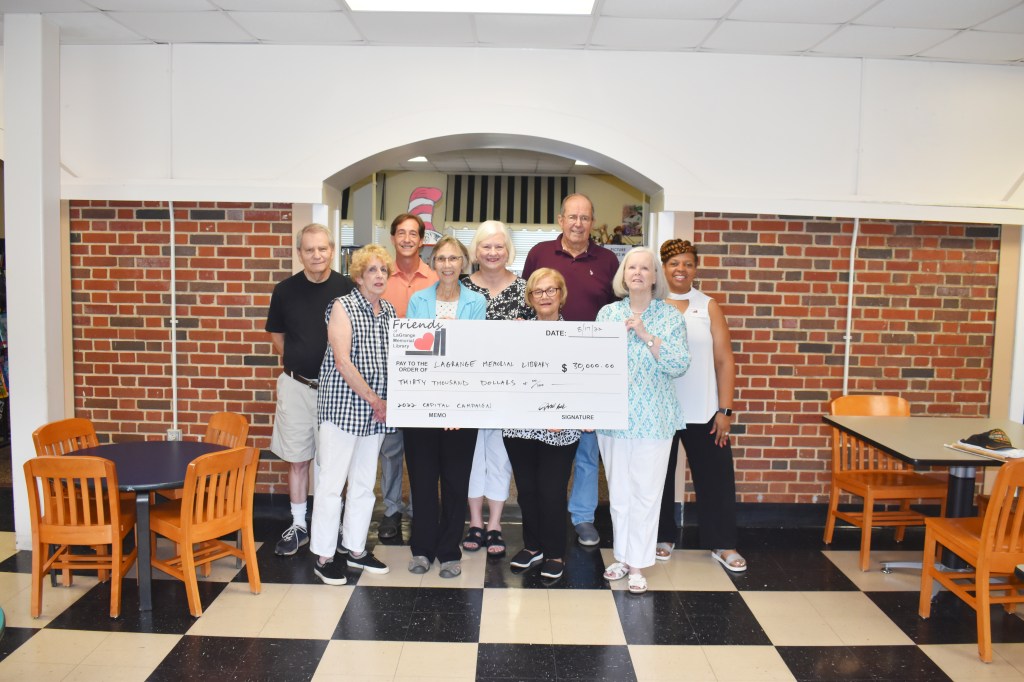 The Friends of the LaGrange Memorial Library, a community group dedicated to supporting our local library, presented a check for $30,000 on Wednesday to help pay for ongoing renovations to the library.

The group presented the check to Keith Schuermann, director of the Troup-Harris Regional Library System, at the library’s temporary location in the former Unity School on Park Ave.
“Having an active and engaged friends group such as ours has been a true blessing over the many, many years,” Schuermann said. “Their support of our library is critical, particularly in helping us to execute our popular summer reading programs. Without their support, we would not be able to do what we need to do for our community.”

The large donation is the result of cumulated efforts by the Friends of the Library since the library renovations were first envisioned more than seven years ago. The group was able to collect money to help pay for the renovations using many fundraisers, including their monthly book sale, along with membership dues and individual donations.

The renovation project was originally budgeted at $6.8 million, but later ballooned to $8.2 million due to inflation of material costs. Schuermann advised that further fundraising efforts and donations have reduced that deficit, however, they are still about $800,000 short.

Troup County and the City of LaGrange initially contributed $1 million each toward the renovation project to go along with $2 million from the Callaway Foundation and a $2 million capital grant from the state.

Supply chain problems also delayed completion of the project by at least four months. The renovations began in 2021 and were previously projected to be completed by October 2022. Schuermann says they have now sorted out supply issues, and he believes they will be able to reopen in Spring 2023.

The library is still seeking funds to finish paying for the renovations through donations and grants.

The next Friends of the Library book sale is set for Sept. 8-10. Normally, the sale is held on the first weekend of each month from 10 a.m. to 5 p.m. on Friday and 10 a.m. to 2 p.m. on Saturday, but the September sale will be pushed to the second weekend due to the library being closed for Labor Day.