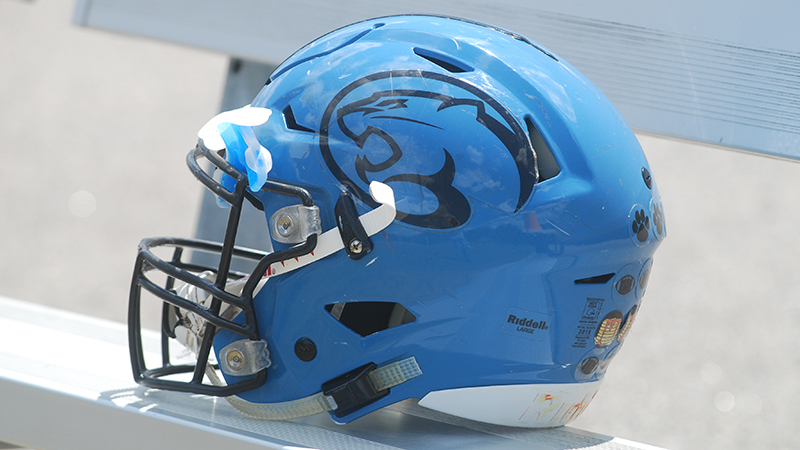 The LaFayette Christian School football team reached the mountain top back in 2020 when they captured the state title with a 38-0 victory over Hancock Academy. This was a sweet victory for the Cougars after finishing runner up in 2018 and 2019.

Last year was a transition year for the Cougars in every sense of the word. The Cougars transitioned to 8-man football as well as introduced a new coach in Jered Pike. Pike had been around the program as the junior high coach and assistant high school coach before getting the big promotion.

“I feel pretty comfortable with it now,” Pike said. “I feel super confident in this team.”

The Cougars moved up to division 1 in 8-man football after being division II last season. This will be another transition year, just not as many changes as the previous offseason.

“We haven’t played these teams before,” Pike said. “These will be brand new teams that we will be playing this year.”

Pike has already started scouting his new opponents. Pike knows that it will be a tough road ahead, but believes his team can reach the playoffs this year.

The Cougars often come into games smaller in size than their adversaries, but they make up for it with tenacity and heart.

This is not news for the Cougars who have been smaller in stature for years.

“I don’t think our players even care anymore,” Pike said. “They are used to it at this point.”

With Pike going in to his sophomore season in charge of the Cougars the offensive and defensive philosophies are more concrete and the returning players have a better understanding of how Pike wants to play as well as the demands of 8-man football. The Cougars come into the season slightly undermanned as the team only has 19 registered players as of the publication date. This leaves the team shorthanded when it comes to fielding a team with eight different positions on offense, eight on defense as well as two special team positions. This will require some Cougars to play both sides of the ball which is not an easy thing to do in 8-man or 11-man football.

The Cougars will also be a young team as eight of the 19 players will be freshman. Fortunately, the Cougars will have seven seniors to help lead their team to go along with four juniors.

Pike will look to balance playing his experienced players while also getting in some reps for his younger players that will be playing a role on this year’s team as well as future Cougar teams.

Pike runs a more fast paced spread offense than the one run by his immediate predecessor. This requires his players to exert a lot of energy, but his team enjoys playing the up tempo style of play.

“The kids seem to really enjoy playing in our offensive system

Andrew Hough will be returning as the starting quarterback after being the starter last year as a junior. While slightly undersized, Hough plays much bigger than his size and is the type of player that will lower his head and finish a run over sliding.

“He had his best season last year,” head coach Jared Pike said. “He threw for around 2,000 yards so he’s our guys back there and we’re going to stay with him.”

Paul Bastini will provide cover at the quarterback position for the Cougars. While Hough offers some threat with his legs, Bastini is your typical pro-style passer.

The Cougars may also deploy some wildcat this season with one of their running backs getting a chance to run the show.

Ephraim Snyder was the team’s no. 1 running back last year and will take on that role again as a junior this year.

“He’s more of a power back,” Pike said. “He’s got some speed in the open field, but he’s a stout, really strong, stocky guy.”

Behind Snyder it will be freshman competing for the spot. Pike is still sorting out what position works best for each incoming player.

Alex Tusing was the team’s leading receiver last season and is entrenched as the team’s top wideout again this season. Tusing, a senior, can also play running back and his versatility will be key for the Cougars this season.

“He’s a deep threat, but he’s also the type of guy you can throw a screen to and he’ll make something happen,” Pike said.

Senior Braden Firth will combine to form a formidable one-two punch with Tusing. Firth is coming back from a major knee injury in the final game of last season. He was the team’s second leading receiver last year and like Tusing he supplies a lot of versatility. While Tusing brings the speed, Firth brings the power.

“He’s just a big tall strong kid,” Pike said. “He does whatever you tell him. He will block, he’ll run any route you ask him to run.”

Tyler Dollar, another senior, will slot in as the no. 3 receiver. Dollar will move all over the field on offense and could see time in the backfield as running back and quarterback as well as tight end.

“He knows every position on the field,” Pike said.

The Cougars will also be looking to work in some freshman as well with all three starting receivers set to depart at the end of the school year.

Jonathan Ross and Branden Davenport, both freshman, could see time at tight end and possible receiver as well.

“Right now as it stands we have an all-freshman starting offensive line,” Pike said.

“[Evert] actually started last season, but he really played there out of necessity,” Jared Pike said. “It was the same case for Baylor.”

Snyder will be one of the guys that Pike will be looking to get a breather at times this year as he is more important to the team as the star running back.

Behind the defensive line, the cougar typically starts two linebackers, but will occasionally run with three in sub packages.

“Usually we have two, but as of right now I have no idea who is going to start there,” Pike said.

Senior Braden Firth might get the start at linebacker to help lead the defense. He has never played there before, but Pike believes he has the ideal size and strength for the position.

The Cougars will likely start a freshman at one of the linebacker positions as Pike will have to sort through the strengths and weaknesses of all his incoming freshmen to see who is the best natural fit for the position.

In the base defense the Cougars run two cornerbacks with a single safety on the back end. Alex Tusing will get the start at safety this season and will be one of the leaders of the defense.

“Tusing started at linebacker for us last year, but he is a much better safety,” Pike said.

The Cougars starting quarterback Andrew Hough will also be one of the team’s starting cornerbacks. Pike is confident enough in Hough to consistently leave him on an island to shut down the top receiver on the opposing team.  Paul Bastini is one of the Cougars that will receive time at the cornerback position. Tyler Dollar and Braden Firth also have experience playing corner. Chaz Clark, a senior, could see time there as well.

“We flip flop positions so much that it’s hard to say who will start where,” Pike said.

Pike will also be looking to get some freshman some game time here including Conor Hudson.

Alex Tusing was the team’s punter last year and will likely resume those duties again this season. Andrew Hough did kickoffs while Chaz Clark attempted PATs.

“I think at this level, it’s hard to take 30 minutes out of practice to go work with a player on a skill that is going to get us one point,” Pike said.

Pike plans to go for two most of the time as he sees the benefits outweigh the costs.