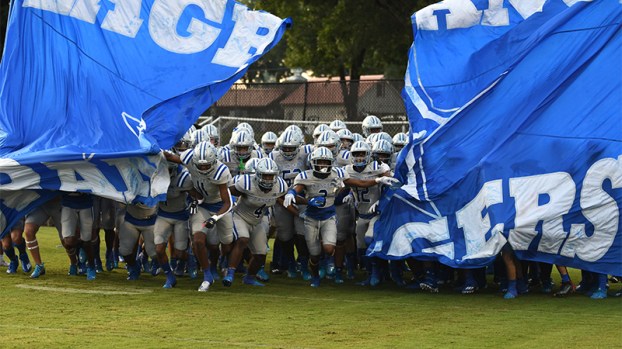 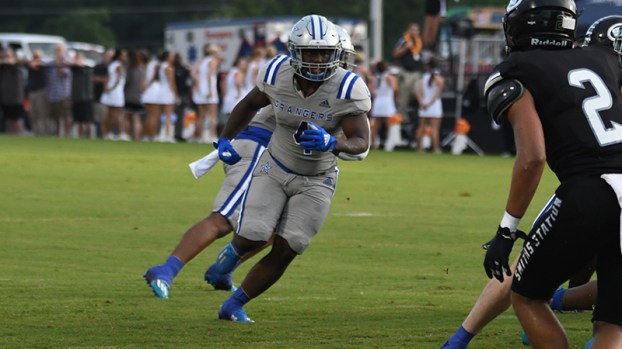 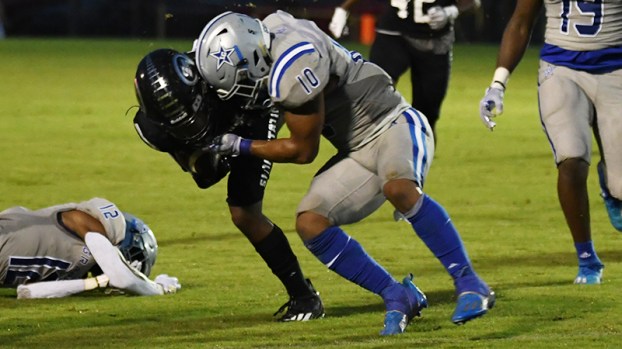 The LaGrange High School football team earned a win in the first game of the season over Smiths Station 49-20 on Thursday night.

“You want to come and play really well out of the gate,” LaGrange head coach Matt Napier said. “We faced some adversity early.”

The Granger fell behind twice in the first half before taking command after the break.

The first half was a back-and-forth affair with the Grangers able to take a 21-13 at the break on an unbelievable run by AJ Tucker who carried the ball 58 yards to score a touchdown as the time expired on the clock.

“These analytical guys talk about stealing a possession and that’s what we did,” Napier said.

The Grangers followed this by scoring on the first play of the second half as Malachi Fannin-Render took the ball 75 yards to the house and just like that the Grangers held a 28-13 lead and essentially put the game to bed.

“I knew it was six the second I got the ball,” Fannin-Render said.

On Fannin-Render’s big play, wide receiver Magic Johnson set the edge with a fantastic block which earned the plaudits of his coaches. Johnson, a senior, did not have much to do receiving as the Grangers did not delpy the passing game much. He was still able to take a couple of quick screens and turn up field quickly and finished with three catches for 22 yards.

“We know he can catch the home run pass, but can you do the little things?” Napier said. “Johnson did that tonight and it was a great show of leadership.”

Tucker exploded for two touchdowns in the first half. His first came towards the end of the first quarter to give the Grangers a 7-6 lead after allowing the Panthers to take the opening possession and march down their throat in three plays for a touchdown.

“We know AJ Tucker is a problem in space because he’s a 200 lbs. running back and he’s tough to tackle,” Napier said.

Tucker ended the game with seven rushes for 101 yards and two touchdowns.

“It felt really good to be back out there and I felt real smooth,” Fannin-Render said. “We were really prepared for this game.”

The Grangers run game was there all night. Starting quarterback Jaylan Brown also scored two rushing touchdowns. Brown carried the ball 7 times for 25 yatds. Brown was 3-for-4 passing for 22 yards as well.

Jonathan Keys scored the Grangers final touchdown of the game in the fourth quarter when he crossed the goal line from four yards out.

“We have a true three headed monster at running back,” Napier said.

The offense stole the limelight, but the defense put in a solid shift as well. After a not so great start to the game, the Grangers bunkered down and did not allow a point in the second half outside of a garbage time touchdown with their backups in.

“They came out and did a few things we weren’t ready for including a reverse,” Napier said. “We adjusted to what they were doing and our kids started getting that fire going.”

Shurmack Brazil, JD McCutcheon, DJ Langston all had a sack in the game for the Grangers to help lead the defense. Christian Ector and Jonathon Keys combined for a sack in the fourth quarter for LaGrange. Harris Grace got an interception and a big return as he set up the Grangers at the Panthers 13-yard line late in the game which led to Keys punching it in for six.

The Grangers cleaned up the penalties after having 13 in last week’s scrimmage against Harris County. It was not all positive for LaGrange as the team turned the ball over twice on fumbles and got a fortunate bounce a punt return as the returner coughed up the ball, but the Grangers were able to get it back.

“There are certainly some things to clean up,” Napier said. “There were times we had first game jitters, but overall we are pleased with the performance.”

LaGrange improves to 1-0 on the young season. The Grangers will be at home next Friday to take on Northside (Newnan).