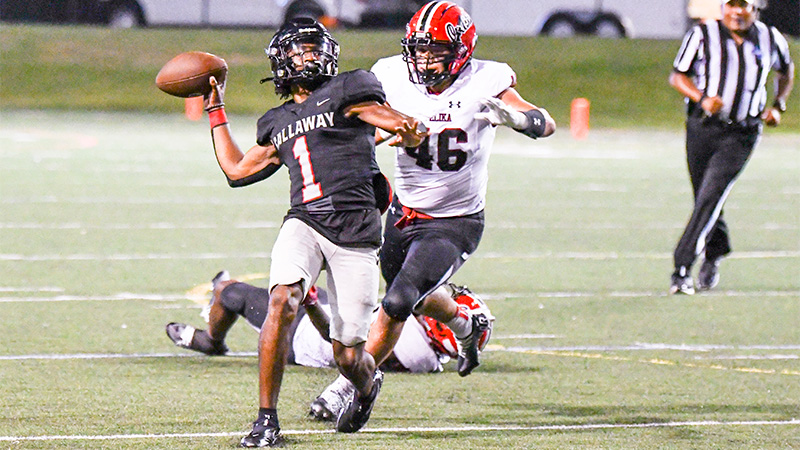 Once again, Callaway-Opelika was worth the price of admission, then some.

The Bulldogs stunned the Cavaliers 29-28 Friday at Callaway Stadium by rallying from two separate 14 point deficits and by going for two with 2:59 left to win the game.

On the deciding two-point conversion, Quarterback Roman Gagliano hit Octavious Gay to give the Bulldogs their first and only lead of the night.

Opelika head coach Erik Speakman said last year’s last second loss to Callaway was on his mind when he made the decision to go for two, rather than a game-tying extra point. In last year’s game, Callaway won on a last second field goal.

“We made the decision if we could score again, we were going to go for two,” Speakman said. “We did not want to go to overtime with Callaway. As big and physical as they are… we don’t bode well inside the 10-yard line versus Callaway.”

The Opelika drive was impressive because Callaway had seemingly just taken control of the game again. On a drive dominated by runs by Qua Whitfield, the Cavaliers marched down the field to take a 28-21 lead with 5:47 left. Fittingly, Whitfield carried it in from two yards out to cap the drive.

Opelika, which had trailed all night until a 40-yard touchdown pass from Gagliano to John Schwenk with exactly 10 minutes left, wasn’t fazed. The Bulldogs went right down the field again, including a key fourth down pass completion, to set up the game winning score and two-point conversion.

Callaway had almost three minutes left to try to answer but quarterback DesShun Coleman was sacked twice, derailing the drive. The Cavaliers turned the ball over on downs with just over a minute to play and the Bulldogs ran out the clock.

“We just didn’t make a few plays at the end. It was a really hard-fought ball game. That’s a great football team in Opelika, but our guys need to have their heads up. We played a heckuva game and we have a lot of things we need to do better, but there’s a lot of positives from tonight.”

Speakman said it was the first time all night the Cavaliers had to get out of their comfort zone, which is running the ball right at them.

“We finally got Callaway into what they don’t do,” Speakman said. “We finally made them play left handed there by getting the touchdown and two point conversion. Honestly, if we don’t score the two points there, he probably runs the ball down the field and kicks a field goal like he did last year.”

The first half — at least for the most part — was all Cavaliers.

On the second play of the game, Coleman hit Bryceton Sanders on a 75-yard bomb to make it 7-0.

Just a few minutes later, on the second Cavaliers drive, Jordan King capped a Cavaliers drive from 5 yards out to make it 14-0 with 7:08 left in the first quarter.

To that point, little had gone right for Opelika, but a screen pass on third down deep in its own territory went over 80 yards, down to the Cavaliers 5.

Even then, Callaway held the first three plays, setting up fourth and goal. However, Gagliano was able to sneak it in to make the score 14-7 with 47 seconds left in the first quarter.

The scoring slowed a bit as the teams traded possessions but Callaway’s passing game set up the Cavaliers third touchdown. Coleman hit Exavious Reed for two large completions, including a third and 5 deep in Opelika territory, to set up a second touchdown run by King, this time from 5 yards out.

Opelika answered before the half with its own touchdown drive, capped by a 1 yard run by Logan Sheridan.

Neither team scored in the third quarter, though one play seemed to flip the momentum greatly. Coleman was intercepted at the Opelika 3 on a deep throw down the sideline, backing the Bulldogs up deep in their own territory.

On the second play of the drive, Callaway blew up a running play — one where the Bulldogs ballcarrier even fumbled and picked the ball back up — and tackled Opelika in the end zone for a safety. The scoreboard read 23-14, Callaway was back up two scores and it appeared the Cavaliers were in good shape with over a quarter to go.

But that changed quickly. The officials wiped off the safety, but it was unclear why.

Wiggins also was unclear what happened.

On the first drive of the fourth quarter, Opelika scored when Gagliano hit Schwenk, who was wide open behind the Callaway defense. That was the only time the game was tied all night.

Callaway will look to bounce back against Cedartown next week.