Bo Beall is breaking his own school records at LaGrange 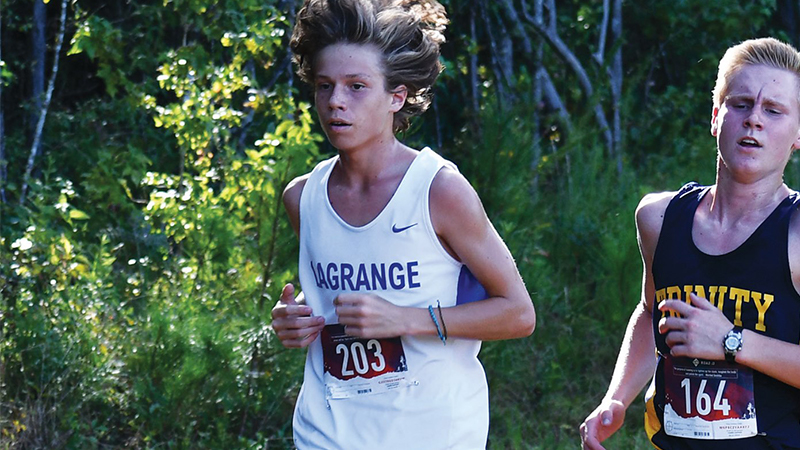 Bo Beall is breaking his own records at LaGrange High School. After setting the boy’s 2-mile record in a previous season, Beall set the bar even higher with an 11 minute and 37 second performance earlier this week in Acworth.

“I just went faster than I thought I could because of past injuries,” Beall said.

He still has to deal with lingering effects from two knee surgeries he had in his freshman and sophomore years. He is slowly, but surely working himself back up, but still does not feel 100 percent. Injuries might have slowed his progress down a bit over the last couple of seasons, but Beall still has the talent to help lead the Grangers cross country team this year.

“I don’t think he expected that,” head coach Blase Leverett said. “It was funny to see the stark contrast between his reaction at the before the race and the end of the race because you could see on his face that he surprised himself.”

Despite being hampered by injuries, Beall has improved during his time running cross country. He started running cross country in sixth grade and has continued on into his senior year with the exception of his eighth grade year when he decided to run track instead. He has retired from track and has focused his fall sport season on cross country.

“I feel like I’ve been developing really well with the help of training from my soccer coaches and my PT and my strength and conditioning coaches,” Beall said. “They’ve all been super helpful.”

While typically cross country meets consist of a 5k (3.1 miles), the early season competitions are of the shorter two-mile variety.

“It’s been a long time since I’ve competitively ran in a 5k,” Beall said.

In fact, he has not ran in one since the end of last season with the Grangers. Beall is still working his way back to peak fitness, as he recovers from injuries as well as working himself back into midseason shape. While it is too soon to put expectations on the season for himself, Leverett sees big potential this season.

“Bo is a veteran member of our team, and he’s the type of runner that lets his actions speak louder than his words,” Leverett said.

He is still working his way back to where his body felt his freshman year before knee injuries began to plague him. In the meantime, Beall will is breaking records and leading the Granger boy’s cross country team.