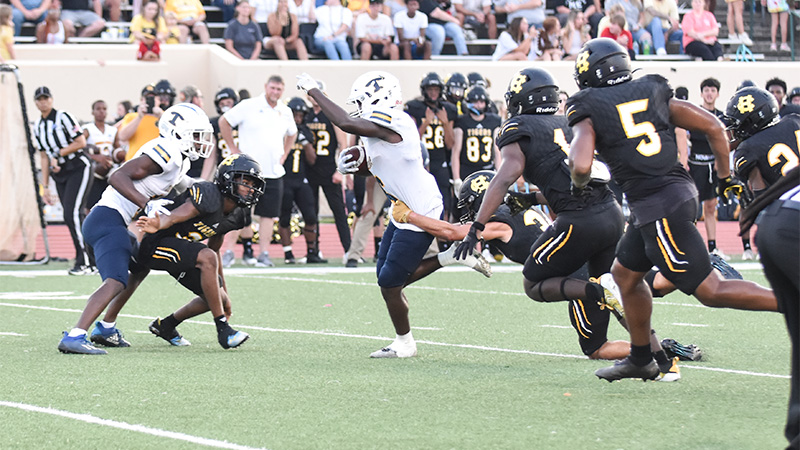 The Troup football team dominated rivals Harris County 33-0 on Friday night to kick off the season.

“It felt really good to be back,” Troup starting quarterback Taeo Todd said. “It felt good to be back out there with the team and build some chemistry.”

Troup jumped on Harris County early and never looked back. After a three and out from Harris County, Troup got the ball on the opponent’s 44-yard line and marched down the field in five plays to score a touchdown. Todd got his first of his first touchdown of the game on a nine-yard quarterback draw.

Troup was able to get another three and out on Harris County’s next possession and got the ball at midfield. On the first play of the Troup’s second drive, Todd took the ball in for six from 50 yards out to give the Tigers a 15-0 lead before half of the first quarter had even expired.

“We thought we had a good game plan, and we saw them in their scrimmage and thought we could do something early,” Troup head coach Tanner Glisson said.

Chris Moore hit his first field goal of his high school career on Troup’s next drive to give the Tigers an 18-0 lead in the first quarter.

After a couple of drives stalled for Troup, the Tigers got right back to work on an option play that Todd took himself 65 yards to the endzone for his third touchdown of the night with 3:21 left in the second quarter.

“I thought he was phenomenal,” Glisson said. “I did not like a couple of those hits he took right there before half which is one of the reasons I didn’t bring him out in the second half.”

Todd was not done scoring in the first half before Glisson decided to put in his backup.

After Harris County did nothing with their next possession after Todd’s big run, Troup marched the ball 47 yards to score just before the halftime whistle. Todd threw a laser from eight yards out to Qua Moss on a slant route with six seconds left to go in the half.

“We had a lot of good plays on offense, especially running,” Todd said. “To be honest, I got to work on my throwing.”

Todd was sharp on the ground and through the air, which was aided by the big men on the offensive line giving him time in the passing game and open lanes in the running game.

“They did a real good job tonight,” Todd said. “They still need work just like the rest of team though.”

Todd stole the limelight with his performance on offense, but the Tigers defense might have been even more impressive on the night. Moss, who caught the touchdown in the second quarter, also showed out on defense. His interception on his own one-yard line with 9:46 left in the second quarter kept Troup‘s shutout alive and preserved the team’s 18-0 lead at that point in the game. Noah Dixon had a fumble recovery for Troup on Harris County’s first possession of the second half.

“[The defense] is fast, and they were flying around tonight and they are pretty physical,” Glisson said. “Qua Birdsong was unblockable in the first half.”

“We tried to get some of those younger guys some experience tonight,” Glisson said.

Troup had a fumble lost on the opening possession of the second half and also had a drive derailed by a bad snap in the second half but that was to be expected as the younger guys go through some growing pains early in the season.

Troup improves to 1-0 on the season and is now 4-3 against Harris County over the last decade. The Tigers will be back on the gridiron next Thursday against Hardaway at Callaway Stadium.